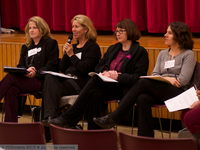 On January 22nd, Senator Ginny Burdick was one of three elected officials to appear at a public forum on gun violence hosted by Family Forward at Bridger Elementary School in SE Portland. The forum was not hidden from public view: it was advertised for several weeks prior to the event, and, by the time of the forum, Sen Burdick’s sponsorship of legislation to limit ownership of assault weapons and high-capacity magazines had been widely covered in local media. However, that evening at the forum, there were no gun-totin’ opponents of Burdick’s bill; despite the fears of organizers, it was a quiet meeting with a passionate, reasonable discussion of the issues.

And a few brief words, stunning in their power, from the daughter of the woman murdered at Clackamas Town Center.

Absent were the loudmouth, cowardly gunsters and political hacks now trying to accuse Sen Burdick of skipping a town hall meeting because she didn’t want to face opponents. Leading the pack is Jeff Reynolds, Chair of the Multnomah County Republican Party and one of the most irrelevant people in Oregon politics. Reynolds prefers to bully people on Twitter than be a productive activist in county politics (he’s “@ChargerJeff” if you want to catch his act). This video stunt is further proof of both his cowardice and pointlessness.

As the photo above shows clearly, Ginny Burdick has no fear of facing the public. (More photos are available here.) She does so five-days-a-week in Salem. The forum was held the week before the Legislature began its current work and while her assault weapon bill was still being considered for movement (ironically, it no longer is). Also showing fearlessness in coming before the public to discuss the issue were Rep Alissa Keny-Guyer, Multnomah County Commissioner Deborah Kafoury, Andrea Paluso and Lisa Frack of Family Forward/The Mother PAC, and Penny Okamoto of Ceasefire Oregon. Jeff Reynolds and his gunster fellow travelers were no-shows. They could have shown up and spoken freely, confronted Burdick and the others about their stands on these issues; but that would take courage, integrity and a belief that we can share a civic space even while disagreeing on critical issues.

The gunsters have no such belief. They’re happy to join together in large groups with weapons displayed, or to post dishonest videos while hiding the identity of the videographer, or to strut down the street trying to intimidate citizens with their manhood, I mean, firearms, exposed. But speak in rational terms in front of a panel of unarmed women?

That’s a challenge Jeff Reynolds isn’t up to. The dude’s just firing blanks.