If journalism dies a death of 1000 cuts, this will be one of them.

For some reason, KATU reporter Anna Canzano thought it would be a good idea to post this on Facebook: 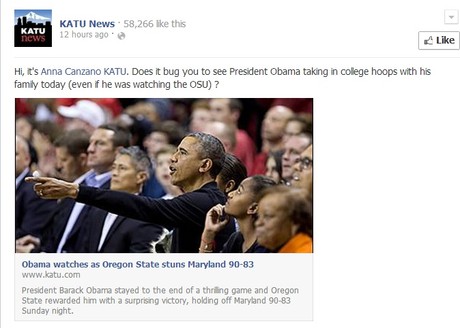 Because the President of the United States should not be allowed to relax and watch a basketball game when there's a big kerfuffle going down, it seems.

Fortunately, the denizens of Facebook weren't having it. She's rightly eviscerated in the comments.

Apparently, 14 Emmys and an Edward R. Murrow Award for Continuing Coverage aren't an inoculant against poor social media judgement by a reporter. If journalists can't figure out how to do basic management of the medium as reporters, then they're truly accelerating their own downward spiral.