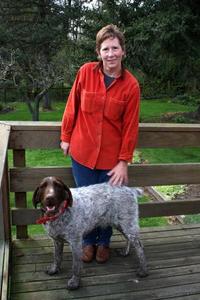 Jean Edwards is a blueberry farmer, fish biologist and landowner who has lived on her 48 acres in Washington County since 1979. "That was quite a commute when we first started", Edwards said, "We were way out in the sticks back then."

In recent years, roadways, housing developments and shopping centers have crept closer and closer to Edwards' farm. The property that she and her husband own is now just off a main arterial that moves cars on and off the Sunset Highway. Tiny, rural Scotch Church Road runs along one side of the farm and is now a busy shortcut for cars and trucks speeding to circumvent the long stoplight at the North Plains overpass on to the freeway.

All nine farms along Scotch Church Road banded together to testify to the Washington County Commission and Metro against having their property placed into urban reserves. All nine of them lost those battles.

Just east of Edwards farm lies Jackson School Road, the arterial that routes traffic on and off the freeway. Farmers working the rich and fertile land on the southern side of the freeway along that stretch are in a tough spot. "The traffic makes it difficult to farm," Edwards said. "Its really tough to move that big equipment when the road is so busy."

Edwards and her husband grow blueberries on six of their acres. They belong to a co-op that has a processing plant in Gresham. She says their berries are stored and picked up in North Plains and shipped to Gresham for processing. The big, nice-looking berries are packaged and shipped fresh, mostly to California where demand for them is high. Edwards and her husband are also considering more local markets for the fresh berries. The smaller berries go in for juicing, jams, syrups, etc. In other words, their farming operation is helping to provide jobs in Oregon.

11 acres are rented out to another farmer who rotates growing wheat and alfalfa on the land. The rest of the land is either timber or large swaths of drain fields/ponds and riparian area for the heavy amount of water that comes down to their land and into McKay Creek, which runs along their property border.

The drainage issue is one of the major reasons Edwards fought so hard against the urban reserve designation for their land. Water runs down from developed areas in the region, especially from the east. Edwards and her husband have built a patchwork series of culverts and dams surrounded by vegetation on their land in order to filter out the impurities from upstream before the water moves into McKay Creek. If their land is developed, all that work will be for naught, says Edwards.

Edwards also noted that the farms all along their road have a filtering effect, improving water quality for the urban regions downstream. They're also working with Oregon State University on crop development for berries from Kamchatka and Russia called Hascap. They hope to test market the product going forward.

Edwards said she doesn't expect their placement in urban reserves to impact them immediately. But she's frustrated by the lack of vision by county government. "You have a lot of infill in downtown Hillsboro", she said. "Lots of vacant blocks". Edwards wondered aloud to me why there wasn't a greater focus on urbanizing areas in the existing parts of Washington County that are already urbanized.

She also said that she wasn't sure what would happened to their tax status if their land is brought into the Urban Growth Boundary. Edwards says that there are tax benefits to being farmland and running an active farm and they're uncertain how that will change things with urbanization. "It's very fuzzy", she said.

Edwards also noted that they came into the urban and rural reserves process very late (something I've heard consistently from people whose Washington County land is impacted by Commission policy). Edwards said, "We weren't really following it or paying attention." Edwards and her neighbors found out about the potential change in their land's status from members of Save Helvetia, rather than Washington County government.

"The quality of life issue here, it's not just jobs", Edwards said, "People come here because it's beautiful. It's rural beauty". Edwards then sighs and says, "The 'city father' types don't always see it that way".