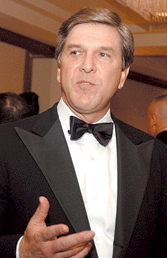 When last we heard from the well-dressed former Senator (oh, how it warms my heart to say former), he had landed on his feet as the president of the National Association of Broadcasters -- the lobbying arm of the television industry.

Last September, I wrote that the move meant that we probably "won't have Gordon Smith to kick around anymore." I spoke too soon!

Now, it appears that El Gordo is girding for battle against our very own Senator Ron Wyden. You see, in the wake of the terrible, awful, no-good, very bad Supreme Court decision Citizens United v. FEC, Wyden is one of the lead sponsors of the DISCLOSE Act, a bill to counter the coming flood of corporate money. And Gordon Smith will be leading the fight in favor of big corporate money.

Wyden's signature provision is an extension of the "I approved this message" bit we see from candidates. Wyden would have corporate CEOs do the same thing in their ads -- a bit of transparency that will actually help reduce the scale and impact of these ads.

What's got Gordon Smith so upset, however, is a provision in the law that would require broadcasters to sell ads to political parties at their lowest available rate. That's already the case for federal candidates, and Wyden would make it possible for the political parties to get the rate.

Wyden's provision is especially important in the wake of Citizens United. You see, when candidates pop up every two years and buy a couple weeks of advertising, they're not a big customer to otherwise justify any discounts. But if Anheuser Busch or Pfizer or Exxon were to come in and directly buy political advertising, it would be presumably be done on the same account that they do their regular advertising -- one that's making massive year-round buys, and presumably getting some nice volume discounts.

As Marc Elias, a campaign finance lawyer who has worked for both Jeff Merkley and Al Franken, told CQ:

“The DISCLOSE Act, for the first time, benefits parties in a meaningful way by both correcting the proper coordination standard when they run advertisements supporting their candidates and also in providing relief from high broadcast television and radio rates during the prime election season.”

Wyden's exactly right to support this critical campaign reform - and Gordon Smith is, unsurprisingly, just being the corporate lackey he's always been.

There's more from Jeff Mapes at the O, and from Matthew Murray at CQ Politics.