Not that anyone asked me, but… 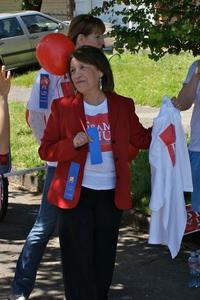 I am lucky in this primary election: all of my choices are easy. I voted for Kitzhaber, Wheeler, Castillo, Cornett, Fish (I’ll get smacked if I don’t add that), Cogen, some judge I don’t know, two ballot measures I’m told are good, and myself as Precinct Committee Person. These were all easy votes for one simple reason: I don’t live in Multnomah County District 2.

I pity you people.

Seven qualified and excellent people running for a single seat, with the difficulty slightly mitigated by this being a non-partisan race, which means two of the seven are going to move through to the general election. People have all kinds of guesses who those two will be, but in an election that might top-out at 35% turnout, it’s a crapshoot more than anything else. The seven candidates have rolled the dice and by 9pm on Tuesday, we’ll know who rolled whatever a winning roll is in craps because I don’t know that anymore than I know who is going to win that crazy thing.

First of all, the best candidate dropped out several weeks ago. Roberta Phillip decided her job with the County Chair’s office meant more to her than slogging through a campaign, whether for one month or the next six; she has the chance to directly affect the work of the County through the Chair’s office, and she didn’t want to undermine that opportunity. As her campaign manager, I was disappointed but fully supportive: it was that quality of character that led me to ask to be her manager 24 hours after meeting her for the first time. She was, without a doubt (in my mind), the most qualified candidate by far (the Willamette Week agreed, tacitly endorsing her before discussing the remaining candidates).

I interviewed all eight candidates for the Portland Sentinel soon after they filed, and I attended two of the debates held for them (the Multnomah County Dems and the Urban League). Tom Markgraf missed the first and Gary Hansen the second, but I’ve had more than the usual chance to hear from each candidate, to study their campaign materials, and to think about who I would have voted for if I lived in that district. I can’t say I’ve made a definite choice, but I have come to a strong preference — for what that’s worth (and it’s not a lot).

But I do have to repeat: these are seven excellent candidates. If every election was contested by persons of such quality, the nature of both our politics and government would be improved hugely. Most fields of this size have a crackpot or two, a candidate who files for everything, a no-hoper with more ambition (or self-delusion) than actual ability, either political or governmental. Not this time. Each person brings a different background, a different personality, a different skill set. The bottom line is that the voters of District 2 will not lose. Some will be disappointed in the outcome, but the Board of Commissioners will have an excellent replacement for Jeff Cogen next January.

My inclination at this point is to hope that the two finalists in the general election are Maria Rubio and Chuck Currie. I say this with some hesitancy, but based on what I have heard and seen, I believe these two are the best of the good choices and I also think a campaign between them would raise substantial issues that would put the Board on notice that changes in emphasis are going to be necessary: those who are marginalized — communities of color, the poor, immigrants, the homeless, the mentally ill — can no longer be set aside for any reason. I know several of the other candidates would push the Board in this direction, but, with Phillip out of the race, I believe that Rubio and Currie would be the most diligent advocates for changes that would benefit those in our communities who need the most from the County.

And I believe Maria Rubio would do so with the most fervor and the deepest belief in this cause. Her first home in Oregon was an immigrant labor camp in Washington County. She does not merely “understand” the plight of the marginalized; she’s lived it. She understands how government works, not just from her time in Mayor Tom Potter’s office but from having worked her way up from front-line service provider (working with the elderly, the unemployed, parolees and courts) to program manager and finally policy developer and director. She has worked for decades with law enforcement agencies across the country, from the local to federal levels, and she’s done so as a Latina — just the idea impresses the hell out of me.

Rubio has the experience for the job and the temperament, but more tellingly to me, she has the ability to learn and grow on the job — quickly. Our interview in March was nothing extraordinary; like all the candidates, she spoke of the need for jobs, equity, etc. What has impressed me is the growth I have seen in her in the two months since we spoke. At the Urban League forum, she was the strongest and sharpest of the seven candidates. As I wrote for the Sentinel:

Rubio, seeking the Multnomah County seat previously held by Cogen, came across as the most energetic, informed and thoughtful of the candidates on the evening. She is also the candidate who has grown most during the campaign; her answers are more direct and informed than two months ago. She spoke of the fear that occurs when communities change, as is happening in East County, with its in-migration of impoverished people of color; the County, she said, needs to take the lead in establishing a dialog that would remove the barriers between neighbors. When County government works with members of the community, it needs to be on an on-going basis, not through ad hoc committees. She wants the community involved in making the decisions about the difficult budget cuts ahead — not just advising on these. “They have the knowledge and experience” she said, “to make difficult decisions.”

So if someone from that district were to ask me who I’d recommend to vote for, I’d say Maria Rubio. But I’d also say that no vote would be a bad vote. I love Currie’s passion and his record for working with the homeless and other marginalized communities. I have learned that Markgraf has a long record of working with his community on issues of great importance, such as low-income housing (but his paid work for the Big Bridge would be a deal-breaker for me). Loretta Smith has done great work as a Wyden field rep over the years, not to mention the incredibly difficult job of being a single mom, something she seems to have had great success with. Paul van Orden has drive, a record of working with a variety of communities on issues, and what appears to be an ability to generate support for the causes he works on. Gary Hansen has served in this and other elected offices before; he’s also got some ideas that I hope the Board will consider regardless of the election’s outcome. And Karol Collymore has not garnered the raft of endorsements she carries for nothing: she’s worked hard to be a leader, to show her dedication to a variety of causes.

As I said, these are all excellent people. The voters have a tough job, one of the hardest choices I’ve ever seen. The great thing is that even if a favored candidate does not win, the voter doesn’t lose. Cogen’s replacement is going to be a terrific Commissioner, but I do have to say, as a non-voter (consider this my fantasy league) that I’d strongly recommend voting for Maria Rubio. All the candidates have the background for the job, but, for me, she’s got the intangibles, the quality of person that cannot be defined but, for each of us, stands out in a way that makes a person our choice. And she is mine.

For what it’s worth.