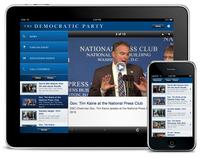 The Democratic Party has launched apps for the iPhone and iPad. (Not coincidentally, today's the day that the new iPhone 4 is released.)

The DNC apps allow supporters to follow national and local news, find local events, connect to Members of Congress, view photos and videos. It's an exciting new project - and you can expect the party to roll out more voter-mobilization features as we approach the November election. (Get the app from the iTunes store here.)

The app was developed by two Portland companies known for innovative mobile technology applications. The main app was built by Small Society, a firm that builds high-end iPhone apps for clients like Starbucks and Zipcar. (Small Society's founder, Raven Zachary, led the team that built the Obama '08 app.)

The Democratic Party app is also one of the first apps to use a new technology developed by Portland firm Urban Airship. It's called AirMail -- and basically allows the app to pop-up unobtrusive "push notifications" that can be either ignored or opened into an attractive message (much like a web page or designed email.) Essentially, that means that the app has an inbox where you can receive messages that you can review when you're interested, rather than cluttering your email inbox.

As Rep. Jefferson Smith has noted, Portland's rapidly becoming a hub for innovative social change ventures. Good to see that a big entity like the DNC was willing to look past the usual media and technology hubs and find the best talent right here in Portland.