Monday's Oregonian included an op-ed by Senator Bruce Starr (R-Hillsboro). No surprise, Starr is cranky - as we all are - about the coming 9% budget cuts to Oregon state government, and its funding to local schools.

Rather, he offered up some process-oriented blather and a bunch of vague generalities. Frankly, the Oregonian should be embarrassed they printed such non-specific nonsense.

For example, Starr demanded a special session that would:

"...give us a chance to make needed reductions to state spending with precision, carefully prioritizing and protecting the services that matter most to Oregonians."

Seriously? Yeah, Bruce, we're all in favor of precision, prioritizing, and protecting services that matter most. Got it. Check. How about some actual details?

The closest that Starr gets to actually proposing "a better solution" is this empty-headed rhetoric:

"This is our chance to cut the bureaucracy, waste and less-important services of state government rather than classroom teachers and school days."

Yes. Yes, yes, yes! I'm all in favor of cutting bureaucracy, waste, and less-important services. Bruce, would you care to explain how you're going to cut bureaucracy and waste - and which services are less-important?

As a progressive, I abhor wasteful spending in government. After all, if there's a program that's supposed to, say, feed hungry children - and that money is instead lining the pockets of a subcontractor, well, that's not achieving the progressive goal of feeding hungry children.

Is there waste in government? Of course. Should we root it out? You bet. But that's not going to happen in a special session budget committee at the legislature. Rooting out waste happens in the executive branch, by creative and aggressive managers - and by outside auditors.

Legislators make budgets. They increase or decrease the spending for particular programs, departments, and agencies. Which gets us to Starr's call for cutting "less-important" services.

Once again, courtesy of the Bus Project last year, here's the rough breakdown on where the legislature spends general fund and lottery dollars - most of it discretionary: 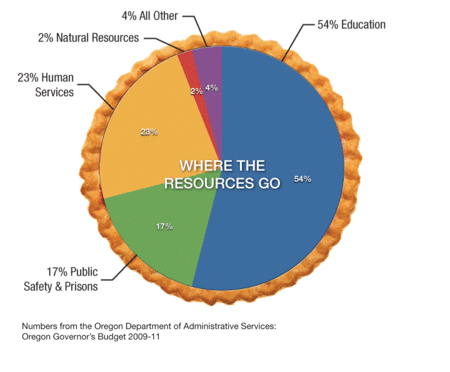 So, Bruce, since you say you've got "a better solution to balance the budget", I'll ask: Which 9% are you going to cut? Education? Prisons? Human services and health care? It's not like there's a Department of Free Candy and Circus Clowns. Bruce, which $572 million will you cut? Name the program. (Heck, I'll go easy on you: Let's just start with one-tenth of the problem. What $57.2 million would you cut - if you were king for a day?)

Above, I took a shot at the Oregonian for printing this nonsense. But the Oregonian's hardly alone in this. Oregon is facing serious budget problems. This is a time for serious leadership and serious answers. So, my dear friends in the media, don't fall for the nonsense. Don't let lightweights like Bruce Starr get away with blather. If someone tells you they have a magic answer to our problems, make them detail it. Make them get specific. Most Oregonians have no idea where the money goes; and unless you make the politicians get specific, they never will.