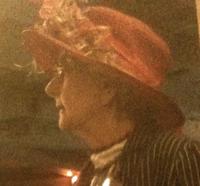 One of the many impressive actors at the event

Last week I attended an inspiring and engaging event promoting the centennial of women’s suffrage in Oregon. The event included a faux town hall debate in period costumes about whether to give women the vote, and attendees included some of Oregon’s political luminaries, including Judge Betty Roberts and Secretary of State Norma Paulus.

Finally, in 1912, by a 52-48% margin, male voters passed the right for most women to vote (Native women gained the vote in 1924, and for years after laws restricted immigrants’ voting rights). While voters in Benton, Washington, and Clackamas counties voted against the women’s vote, voters in most eastern and southern Oregon counties – Baker, Klamath, Malhuer, Union – were pro-suffrage, as were voters in Multnomah County. The seventh state with suffrage, Oregon followed Idaho (1896), Washington (1910), California (1911), Utah, Wyoming and Colorado. National women’s suffrage was ratified in 1920 (Oregon’s ratification was the 25th of 36 states required).

As with most great struggles, the fight for suffrage required a huge amount of work, including decades of grueling organizing and coalition building. By 1912, the coalition for suffrage included dozens of organizations, including labor groups, the Grange, temperance unions, and socialists. Specific suffrage organizations included the Colored Women's Equal Suffrage League of Portland, a group of Chinese American women, and men’s suffrage associations. The measures were fought by many newspapers and by the liquor and business interests, who were in part worried women would vote for prohibition (an accurate prediction).

After gaining the right to vote, women slowly gained power in the political sphere, becoming state representatives and senators, mayors and city councilors, and finally members of Congress, Secretary of State, the Supreme Court, and Governor (just once, so far, with Barbara Roberts). There’s still significant progress to be made; we have no women in Oregon’s Congressional delegation, only two of our six statewide elected officials are women, and only a third of our state senators and 27% of our state representatives are women.

Learning about Oregon’s suffrage history can deepen our sense of what it means to be progressive Oregonians. As we study suffrage, we naturally grapple anew with questions of race, class, and gender equity. We learn about the long work of labor unions, and Oregon’s deep history of anti-immigrant racism.

Perhaps most importantly, as we work to fight today’s huge challenges that seem insurmountable, we can find inspiration in the dedication Oregon women and their allies showed in their 53 year-long fight for the basic right to vote, and their work in the nearly 100 years since.

Visit the Oregon Suffrage Century of Action website and contribute, so that more Oregonians learn more about the quest for suffrage.

Excerpts from a suffrage presentation by Dr. Kimberly Jensen.

For history buffs, make sure you visit the Oregon Encyclopedia.