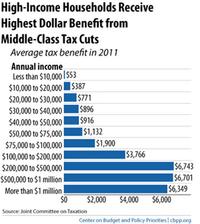 It's yet another reason why Congress should allow the Bush-era tax cuts that benefit only the wealthiest Americans to expire as scheduled.