Peter DeFazio emerges from the rubble and vows to rebuild the U.S. government 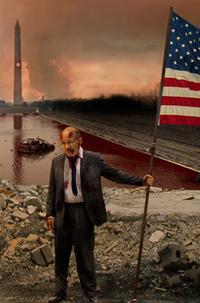 WASHINGTON—In the wake of what is being called the deadliest midterm election in the nation's history, Washington's sole surviving politician, Rep. Peter DeFazio of Oregon's 4th Congressional District, emerged from the rubble of the Capitol building Wednesday to announce his intention to rebuild the fallen U.S. government.

The events of Tuesday night—which included live televised images of Sen. Harry Reid taking a gavel to the head of Sen. Mitch McConnell while Rep. Barney Frank repeatedly smashed the face of Undersecretary for Food Safety Elisabeth Hagen against a marble column—left most Americans believing their entire government had perished in the post-election bloodbath. But the miraculous survival of DeFazio points to a possible way forward.

After fashioning a splint for his broken leg and treating himself for superficial head wounds, a shaken DeFazio addressed the nation Wednesday.

"If anybody can hear me, my name is Peter DeFazio, and I'm a member of the U.S. Congress," he called out from a makeshift podium atop the ruins of the Lincoln Memorial. "I—I'm not sure exactly what happened here, but I want to assure the American people that we, or rather I, will get to all of your concerns as soon as humanly possible. I promise."

"I will find my old office, or build a new one if necessary, and Christ, whose is this?" DeFazio added as he pulled a severed ear from his coat pocket. "Is this…is this [South Carolina Sen. Lindsey] Graham's ear? Jesus God, what happened here? What have we done?"

Read the rest. (And make sure you read to the final sentence!)