SB 525 opt-in for phonebooks in Oregon 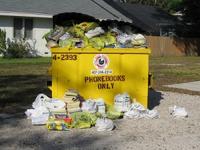 let's end this together

Remember the last time you used a phone book? Well, for many of us, that was a long time ago. Yet, even in the Internet age when it's become much easier to look up a number on-line or on one's phone (unless you have a landline), these bulky tomes keep coming to us. You might ask, why, when there is so much going wrong in the world have I chosen to focus on phonebooks? Well, I learned a while ago that it makes sense to focus on a thread, and keep on pulling, and somewhere along the way, the wastefulness and just downright pain in the ass to deal with of phonebooks got to me. I'm not alone. If you search YouTube for yellow pages you'll see many people who are disgusted enough by their continued existence and delivery that they make short videos detailing their experience. I thought I'd get in the act by creating a video that describes the issue, too.

So, 2 years ago I asked my fantastic State legislator, Jules Bailey, to submit legislation on my behalf - moving Oregon to an opt-in system for phone books. The bill, HB 3477, was presented at the very end of the 2009 session, landed in a committee, had a hearing and promptly passed into history. Since that time, the books keep coming. The people who make the Yellow Pages insist that it's free speech; that there are ways to opt-out (they are ineffective, ever try it?); and it turns out that phone companies are trying to get out of printing white pages (no money in it for them).

In 2010 I decided to get a little more proactive, and presented the legislation again, this time to my State Senator, Chip Shields, well advance of the 2011 legislative session. Senator Shields presented it in Salem and now Senate Bill 525 or SB525 has landed in the Business, Transportation and Economic Development Committee and awaits a hearing. The next step is to ask the head of that committee, Senator Lee Beyer of Springfield, Oregon, to give the bill a hearing. Educating the other members of the committee, it turns out, is also important, because they'll all have to vote on it if it gets a hearing, and any one of them can suggest to Senator Beyer that the bill get heard. The committee is comprised of 3 D's and 3 R's. Here are the email addresses for everyone on the committee.

As you might guess, there's a lot to learn about passing legislation on the State level. And, you hear different suggestions on how to do it effectively from different people. At the same time as this is going on, I'm trying to get letters of support and offers to testify from various environmental groups and YOUR NAME HERE. One big issue in Salem, environmentally-speaking, this session, is an effort to ban the plastic bag, so that's getting a lot of attention, but a few radio, TV stations and newspapers are picking up the story of SB 525 and I expect more will as the session progresses. (Also, there's a big push to make marine preserves happen in this session which would be extremely cool.)

Besides the fact that the Yellow Pages industry and those who profit from it, such as SuperMedia, would lose billions of dollars in lost ad revenue (not a small thing), one issue that keeps coming up around SB 525 is that it threatens jobs. Whose jobs? Well, all sorts of peoples' jobs, probably - the person who cuts down the tree; drives the logs to mill, mills the logs, makes the paper (the amount of paper these tomes use is not insignificant), prints the books, puts the books in a plastic sleeve, gathers the data, sells the advertising, delivers the books, recycles the books (80% go to landfills), etc. - all of these jobs would be threatened if we moved to an opt-in system for telephone books. But in a time when States are scrounging around for any savings at all (as are cities, counties, etc), you'd think they/we/me might wish to pay less for things like garbage/recycling collection - as would all taxpayers who are the actual financial backers of this system.

Is this where you want your money going? Think of it - millions of phonebooks a year could NOT BE MADE. Reduce, in the phrase Reduce, recycle, reuse. But instead, we're a bit stuck with this system because some corporations are making money on the deal, so we keep doing what we've always done.

OK, so here's my question to you. Jobs are important. Putting food on one's table is important. But are all jobs necessary? And do we keep unnecessary jobs at all costs? If phonebooks are unnecessary, and most people agree that they are, then how can we as a society clearly say ENOUGH??