A Tax Code Subsidy Gets Ways and Means Review: A Reality-Based Fiction 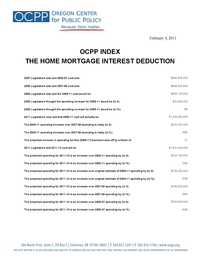 Chair Howie Prioritize: The Ways and Means Subcommittee on Housing Opportunity and Jobs will come to order. Today we’re going to hear from Rich Houser, the director of Oregon’s housing and economic development agency. Mr. Howzer is going to talk about Oregon’s program that subsidizes home loans. Rich, glad to have you here today.

Rich Howzer: Thank you, Chair Prioritize and members of the Committee. I am Rich Howzer, director of Oregon’s housing agency and I am here today on behalf of the Governor telling you about the cost of our program that subsidizes home mortgages. It’s a program that’s been on the books for decades and plays an important role in helping Oregonians purchase a home. In this economy, with the terrible housing market that we’ve had for the past two years, I hope you will once again see why this program is important for Oregon.

Chair Howie Prioritize: Thank you Rich. Let’s get down to the basic facts and numbers about the program. We all know about it – heck, if there’s a state program that’s a third-rail of Oregon politics, this is it. I know it is awkward asking questions about a program that’s as popular as apple pie and motherhood, but it’s my job to ask. First, how much did this program cost in the 2005-07 biennium before the housing crash really hit?

Rich Howzer: I first want to say I’m going to be going over a lot of numbers today. All of them come from the index (PDF) we’ve distributed to the committee. You may want to refer to it as I go along. Now to your question, Chair Prioritize. The program cost about $849 million in 2005-07 before the housing crisis hit. And in 2007-09 its cost was $885 million.

Chair Howie Prioritize: Come again? You’re telling me that we thought spending would increase by about $21 million and it actually increased by about $424 million? That’s almost as much as the entire budget for the Portland Public Schools for one year. We don’t let spending on education, health care, early childhood education and development, public safety and corrections run over costs like that.

How can you be overspending on the subsidy like that?

Rich Howzer: We’re not overspending. You gave us a blank check for this program.

Chair Howie Prioritize: What do you mean, “a blank check?”

Rich Howzer: When you created this program decades ago, you set no cap on how much money we can spend. You set no “sunset” or expiration date that would automatically force a re-evaluation of the program. Unless you vote to kill or modify the program, it lives on indefinitely, without limit on how much money it can gobble up. Our projection was off because as I am sure you can appreciate, it's hard to predict what’s going to happen in this vital part of the economy two years into the future.

Chair Howie Prioritize: So, how much are you expecting this program to cost us in the upcoming 2011-13 biennium?

Rich Howzer: About $1.6 billion. That’s 25 percent, or about $323 million, more than we’re spending now and 84 percent more than in the last biennium.

Chair Howie Prioritize: At a time when the state is facing a $3.5 billion revenue shortfall and every legislator here has to find deep cuts in state programs, you are asking for a 25 percent, $323 million, increase, and that's on top of spending more than you said you would this budget period.

Rich Howzer: With all due respect, we’re not asking for permission. We’re just letting you know. As I noted earlier, because of the way the program is structured, we get the money automatically without any review of the program. And it’s an open-ended appropriation. Our spending could go up by more than the $323 million we anticipate for the next two years. The reality is the train has no breaks. We’re just bringing the numbers to your attention today since we know your wallet is a bit tight right now, with the recession and all.

Chair Howie Prioritize: Well, thank you. At $1.63 billion for the upcoming budget period, this is a large spending program. Can I rest assured that almost every taxpayer directly benefits from it?

Rich Howzer: Well, no, you can’t sir. The last time we looked at the numbers we found that nearly two out of three households – 64 percent – receive no benefit from the program.

Chair Howie Prioritize: But at least it helps those who need the most help, low- and moderate-income households, right?

Rich Howzer: Sorry, but not really. In fact, we’ll subsidize up to $1 million in mortgage indebtedness. People who can afford a $900,000 mortgage aren’t exactly low- or moderate-income households, frankly.

The program is helping few low- and moderate-income households. Only 13 percent of households with incomes below $40,000 used the program. In other words, a small fraction of taxpayers having low- to middle-incomes get to use this subsidy.

Chair Howie Prioritize: I know that many states have a similar program but there are a handful of states that don’t. Those states that don’t have this subsidy program have lower homeownership rates, right?

Chair Howie Prioritize: And if we do nothing, this program continues unabated? It will continue subsidizing the wealthiest of homeowners while helping few low- and moderate-income Oregonians or first-time home buyers?

Chair Howie Prioritize: But if we think this program represents misplaced spending priorities we can easily change it, right?

Rich Howzer: Well, not exactly. I think you might very well run into a political buzz saw, even though all you'd be doing is improving a spending program.

Chair Howie Prioritize: Thank you Rich for this sobering testimony.

Committee, besides encouraging you to study the index (PDF) that Rich shared with us, I want to give you a heads-up for what else is on our agenda in the coming days.

We are going to consider expanding the subsidy we give film and video companies who want to film movies, ads and TV shows that take place in Oregon, and then we’re going to talk about a new subsidy program that only your most wealthy campaign contributors will likely benefit from as we create a small work penalty for the majority of your constituents.

Until then, this committee is adjourned.