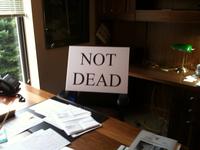 Azusa Suzuki, Carol Suzuki's mom and Rep. Brian Clem's mother-in-law, testified in my committee today to tell Regence Blue Cross Blue Shield of Oregon that she is not dead yet.

Regence denied her major medical claim on the basis that she was dead. For five years she gave evidence to the contrary and they still wouldn't pay. She was testifying in support of SB 719 in my committee, which would remove the exemption that insurance companies enjoy from the state's Unfair Trade Practices Act.

What do your think? Should insurance companies be subject to the state's Unfair Trade Practices Act?