Shawn Lindsay: get over yourself 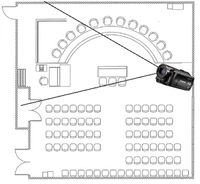 This is freaking awesome. Over at OregonCatalyst.com, under a photo of me with the caption “T.A. Barnhart of BlueOregon “tracking” Rep. Lindsay”:

Is this “tracking” being done as a favor to all the House Democrats – who are big clients of BlueOregon’s co-founder Kari Chisholm’s business: Mandate Media? Mandate Media took in $193K from Democratic state-level candidates & elected officials in 2010.

Simply put, Rep Shawn Lindsay is one of the last people I want in front of my camera. I disagree with him on policy issues across the board, and I was offended by his use of House floor “courtesy” time to inject his religion into the proceedings. But I’m not in Salem to track Republicans or dig up dirt; I’m here for a more positive reason:

"The Action TAB” will be a on-going video report of the 2011 Session of the Oregon Legislature: hearings; interviews, the progress of bills, and reports on how it all affects Oregon's progressive community. I'll report daily: video, tweets (from hearings), quickie Facebook updates, blogs (TheActionTAB.net, BlueOregon.com, more), and even radio reports. By the end of the session, I'll have compiled a record of the session, how the progressive agenda advanced, and what is in store in the coming year.

That’s from my page at Kickstarter.com, and it’s the reason 29 people donated over $1,500 to help me in my video project, The Action TAB. Nowhere in the description of my project will you find anything about tracking Republicans or accumulating material for use against them. You will find this:

I will also have material that can be used during the 2012 election to promote progressive candidates.

Here’s what’s wrong with Rep Lindsay’s paranoid delusion: the way hearing rooms are designed in the Capitol. Refer to the image at top: There are two places I can set up a camera: at the back, which is a useless angle (and too far to get decent shots even with my Canon Vixia HF10) or at the side opposite the clerk. In this location, I am slightly in front of witnesses — and if they lean forward enough, not far enough in front. With the committee dias being situated as it is, in a semi-circle, my camera is directly across from whoever is on the far side of the committee dias from me.

Which is where, I guess, Rep Lindsay’s self-aggrandizing paranoia has room to play.

Committee members have assigned seats, or so it appears. For the House Revenue Committee, which I have recorded twice this week, I am opposite Rep Sara Gelser, Rep Cliff Bentz and Rep Jules Bailey, my representative. This is a great room, with two of my favorites easily on-camera. This makes my work easier and makes me happy. With the Senate Education and Workforce Development Committee, which I have observed several times, it’s Sen Chip Shields who is at the far end from me, most readily accessible to my lens. Again: score.

(I am allowed to record behind the rail on the opposite side of the room, which would give me a better angle on the witnesses, but I cannot set up a tripod there. So I am left with this single viable option.)

The House Transportation Committee, where I recorded several hearings in my first two weeks in Salem, provides me with a disappointing layout. At the far end from me, in my line-of-sight, is where Rep Lindsay has been assigned a seat. This is a very disappointing arrangement for me. Also on that committee is Rep Jefferson Smith, but he is only a few chairs to my right (or left, depending on the room), which means he’s a difficult angle to shoot. And I say this with all seriousness: I would trade 100 Shawn Lindsays for a single Jefferson Smith.

I really wish they would trade seats.

When Rep Lindsay approached me after a committee meeting in which he again was in my viewfinder — he, and not Rep Smith, who is far more interesting, entertaining and worth my time — I told him what I was doing. It appears he did not believe went to the Catalyst. (Glad his moral compass is aligned to assume a stranger is lying to him. From which church lesson did you learn that attitude?) He also took the time to tweet about it! Holy carp.

Here's TA Barnhart of BlueOregon (a leftist blog): http://yfrog.com/h7gknyvj. Been tracking me for 3 weeks trying to catch me in a mistake.

Wow. I wonder if he’d care to explain to voters why he thinks he’s that important. Of the 30 Republicans in the House and the 14 in the Senate, he’s the one that would be singled out for a tracker? Is he nuts? If I was going to track anyone, I have other candidates who would be more worth my while. Hell, I didn’t even know who Shawn Lindsay was before I started spending my weeks in Salem at the beginning of the month. I recognized the name as one of the noobs. Beyond that, I had no knowledge of him.

Such as that he has an extraordinarily high opinion of his value in the Legislature and as an Enemy of the Liberal Elite.

(Full disclosure: Kari Chisholm did contribute to my Kickstarter project. He was the biggest contributor, too: $250. Wow. You can imagine how far that’s going to carry me in this project. After I finish bringing down the House GOP I can retire to Aruba.)

Even at this point, I have no desire to follow Rep Lindsay. He’s a bland seat-warmer about whom I have learned two things in the past few weeks: he’s going to inject his religion into his work in a heavy-handed manner and he has delusions of grandeur. But with many more interesting Republicans to choose from — Matt “the Martyr” Wingard, Julie “@hotcouponmama” Parrish, Bill “you hurt my feelings” Kennemer — and numerous intelligent, albeit wrong-on-the-issues Rs — Vickie Berger, Sherrie Sprenger, Cliff Wentz, Katie Eyer Brewer and others — Shawn Lindsay is down at the bottom of my list of people to spend my very limited time on.

And that’s not why I am here. I have a positive agenda: to inform progressive Oregonians about what the Legislature is doing. It’s a task far bigger than my one camera and limited time can do justice to, but I’m giving it my best shot. Why the hell would I waste my time and bandwidth on a backbencher who was of no interest to me before the session began and has now risen to the level of buffoon? Oregon is in serious trouble, and if Shawn Lindsay is wasting his limited time and energy on non-existent political threats like me, then his constituents should be upset. They sent him here to help repair the state, not puff himself up as being so important as to be worth his very own tracker.

Read what I wrote on my Kickstarter page. View the videos at The Action TAB. You’ll see that every word I wrote above, and what I told Rep Lindsay to his face when he confronted me, is true. I’m here to record the progress of legislation and issues of value to progressives in Oregon. I don’t think the presence of Shawn Lindsay will have any impact on either those issues, apart from his obedient votes as directed by his caucus. And I mean this in all honesty: every time I set up my camera to record a committee hearing and see Rep Lindsay across from me, this thought comes to mind:

Would you please trade seats with Jefferson Smith?