"Sometimes it is necessary for the community, either through the city or through a non-profit, to intervene in a marketplace. That is key to finding practical, sustainable solutions to shared problems. Without any development, Portland will languish." 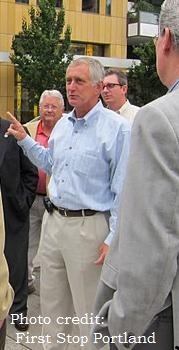 A live action shot of Charlie Hales explaining how Portland is "number one."

Charlie Hales’ fingerprints are all over the intangible notion of “livability” that provides the source of Portland pride. The decade Hales spent as Portland city councilman from 1992 to 2002 saw his direct involvement with a number of projects that shaped the city’s urban landscape. These projects include a $60 million parks bond passed in 1994, the Airport Max line, and the Portland Streetcar anchoring the development of the Pearl District. In the ten years since leaving elected office, Hales has served as an adviser for HDR Engineering, consulting such disparate cities as Cincinnati, Salt Lake City, and Waco, Texas on their livability and urban renewal plans. (Which, perhaps not surprisingly, always seem to include a streetcar.) With his successful record developing the urban identity of Portland, as well as other cities, Charlie Hales seemed like a perfect starting point for a series of profiles on individuals who shaped Portland’s past and provide perspective on its future. My discussion with Hales follows:

The purpose of speaking with you came out of thinking about Portland's identity. What is the city known for, or what should it be known for? There are a handful of cities that have some sort of characteristic attached to it, which is usually attached to a dominant industry associated with it. In Detroit, for example, you had the Motor City, and Pittsburgh has its association with steel. Portland simply lacks such a dominant industry that provides a similar distinct characteristic. Is such a distinct identity a negative thing due to lack of associated industry, or a positive thing as it helps keep Portland “weird?”

CH: Over a decade ago, when I was a councilman, I was having lunch up in Seattle with then-mayor Paul Schell, who likened Portland to a League of Woman’s Voter matron, pulling on her white gloves on her way to attend a civic meeting. And there is something to Schell’s description. Other cities have built “things” which helps provide an identity- St. Louis has its arch, Seattle with the Space Needle, Boston has its internationally famous marathon. These cities do have a distinct identity. But to some extent, these attention-getting objects are for the visitor, and do very little to add to the city’s restaurants or nightlife. In Portland, we do things: trading the Mount Hood freeway for the Max line; rip up blocks of neglected urban blight to put in a streetcar and build an urban neighborhood. It is this nature of Portland that makes it attractive for people to come here and start a business. At the same time, it’s very true that it’s difficult to encapsulate Portland. It is “not a brand.” I think that may come from Portlanders’ ambivalence about more people coming here. While growth is something Portlanders don’t mind, it’s also something we don’t seek.

It’s true that people keep coming here. Willamette Week did a feature some months back about how despite the high rate of unemployment, young creative people keep coming to Portland to not work. I don’t know if you’ve seen Portlandia or not, but there is a bit of ironic truth to the observation that Portland really does seem to be the place for “young people to come and retire.”

I have had a chance to watch Portlandia, and I am aware of the reference you’re making. There’s a big problem with unemployment and the underemployed. People want a job that they are skilled and educated to have. Portland won’t be as successful as it could be as long as we have people falling through these cracks. But there is no demonstrated evidence that a “sound bite” identified solution will lead to jobs. If an easy fix were to come along and drop Portland’s unemployment rate by two points, we’d all sign up. As a result, Portland has a very diverse economy, and not one solely dependent on a particular industry or sector.

While Portland is an appealing place for young creatives who flock here in their twenties to ride fixies and put birds on things, what happens ten years down the line? Is there a concern that due to a lack of an economic sector that serves as an anchor for the local economy and an unemployment rate that seems determined to stay high due to the continual influx of people, will opportunities not be available when it becomes time for young creatives to buy a home and start a family?

Portland is a great place to live for those who already make a living. There really is a nice Portland lifestyle that is unattainable to so many people, blocks of really nice Victorian homes that they simply can’t afford. It’s a disservice for those who live in those houses to ignore others because they all ready have theirs. All hands need to be on deck, and deal with the livability issues in Portland now. We see it in our family every day. I came to Portland at the age of 23, one year out of college in an old car. This was in 1979. I found a job, and made a life for myself in Portland. For some reason, this story can’t be replicated in Portland today, and it needs to be.

This is where the idea of a strong sector of the economy could serve as a base that could put people to work, providing support for Portland’s creativity and general weirdness. Mayor Adams has stated in the past that he wants Portland to be the “most sustainable city in the world” or at least the country, if I’m not mistaken. What does this mean? What does an economic sector based upon the idea of “sustainability” look like? And how sustainable can a city be where it’s a nice place to live, but nearly impossible to make a living?

Green jobs are great. We are a locus for them, particularly renewable energy. We should assiduously grow that economy. But what percentage of the workforce would that take care of: five, ten, even twenty-five percent? What happens after that? We have challenges, but we have strengths: a diverse economy, no longer just lumber and wood, but high tech, Intel, and we have Oregon Iron Works building streetcars. I don’t want Portland twenty years from now dependent on the renewable energy sector. We need to capitalize on diversity, not spend time trying to pick winners in a dynamic economy, but develop the environment in which winners can be created. We learned this from the Wall Street crash: policy makers and economic developers aren’t adept at creating winners, but instead creating the environment in which winners can develop. For example, athletic footwear has grown in our region- how can we make that flourish? The community needs to work with the chambers of commerce to ensure a strong education system that creates a well-educated workforce, while land and government are managed effectively. And then let things roll. Time and again it has been shown that the elements for successful economic growth are just plain vanilla: permits, smart government, and education.

Portland has these various elements to a degree, yet there is no denying the economic situation the city faces is dramatically different than a decade ago when development was in full swing. You and I have both been in the same room with Homer Williams- who developed the Pearl District and South Waterfront- saying that he’d be laughed out of a bank if he sought the type of financing for similar projects he had done in the past. If that’s the situation facing one of the city’s top developers, how does that reflect on the rest of us as we try to navigate into the future?

There are things we can control, and things outside of our control. And one of the things outside of our control is the pendulum swing of the economy and banks being willing partners to allow loans and financing for projects. Banks will give loans to everybody, and then they’ll give loans to nobody. Eventually there will be a return to normalcy. But the present situation is similar to what we faced in the early 1990s, when the banking industry was unwilling to give out loans for such projects as the Belmont Dairy. To a man, none of them could believe anyone would want to live in the Belmont Dairy. So the City Council put general funds into a Livable City Housing fund, headed by Mayor Vera Katz, Councilor Gretchan Kafoury, and representatives of the private sector. This Livable City Housing fund provided financing for such projects as the Belmont Dairy, and after our lead the banking industry followed with support. Sometimes it is necessary for the community, either through the city or through a non-profit, to intervene in a marketplace. That is key to finding practical, sustainable solutions to shared problems. Without any development, Portland will languish. The Belmont Dairy project was successful simply because Portland leaders believed that people wanted to live the urban lifestyle.

Finally, I gotta ask about all these rumors flying around that I keep hearing about. Are we going to see a mayoral run by former City Councilman Charlie Hales in the next year?

(Laughs.) I’m not ready to make any announcements. I love Portland. It needs good leadership. I’m considering it. I’ve long told others that politics is not a spectator sport. Perhaps I need to figure out whether it’s time to take my own advice!