Lots of news on the redistricting front. Here's a recap of the last 36 hours:

On Tuesday, the O's Jeff Mapes reported that Congressman Kurt Schrader had joined Congressman Earl Blumenauer in criticizing both of the congressional redistricting plans produced by the legislature.

"I just don't see the need," said Schrader. "There has to be a smarter, more bipartisan, less egregious way to do it."

On Wednesday, the state GOP jumped the gun and filed a lawsuit in Yamhill County on redistricting. That's a bit silly given that the legislature hasn't yet produced a plan, nor has the clock run out. It certainly seems to reveal a lack of confidence in the legislature's Republicans on the part of the state party. 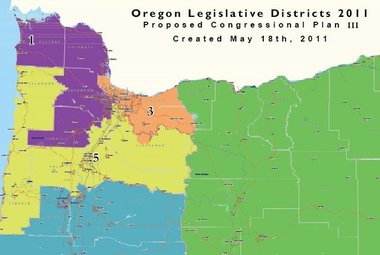 (Here's the PDF. Hopefully it'll be up on the Moonshadow site shortly. Update: It's up!)

The new Democratic map is a quantitative improvement over the previous maps - as it shifts just around 90,000 people from one district to another. The earlier Dem map had moved some 200,000 and the GOP map moves about 470,000.

If this new map becomes law, the major shifts would be to give Kurt Schrader's OR-5 the entire city of Milwaukie (from OR-3), and a somewhat bigger chunk of Southwest Portland (from OR-1). It's hard to tell on the low-resolution PDF, but I'm told that there are some minor boundary changes between OR-1 and OR-3 in Northwest Portland, mostly to make the numbers balance out.

This new Democratic map looks like a solid entry as a compromise map that addresses many of the concerns of the Republicans as well as the desire by Blumenauer and Schrader for a map that represents a less-radical change.

Of course, there's always a critic somewhere and on this new map, that role is played by Congressman David Wu - who told the O's Jeff Mapes:

Wu complained that the proposal takes away about 36,000 of his 87,000 constituents in heavily Democratic Multnomah County and comes within a "Tiger Woods Drive" of moving his Southwest Portland house out of the district.

Setting aside his rather unfortunate choice of metaphors, Wu doesn't seem to understand the math, the politics, or the law. His OR-1 district needs to lose around 36,000 residents, so they're going to come from somewhere. With legislative Republicans, Schrader and Blumenauer all objecting to new county splits, that shift has to come from Multnomah County (rather than breaking up Columbia, Lincoln, or Hood River counties.) And as for his house? Well, the legislature is specifically barred from considering the impact on particular incumbents. And besides, what's wrong with being several hundred yards inside the district? He's still inside it, after all.

This new map seems to put the legislature on the path toward bringing this process to a close. Stay tuned.