Redistricting: What are communities of interest? A look at Metro's redistricting maps.

As the legislature continues to slog its way through the process of redrawing the entire legislative (and congressional) district maps, I thought it would be interesting to look at a much simpler redistricting map -- the one for the Metro Council. Though there's just six districts across the three-county metro area, it's still quite instructive in thinking about the various challenges contained in redistricting - particularly with regard to "communities of interest".

Metro is currently considering three redistricting options. Here's an animated graphic I produced that highlights the areas of disagreement between the current map and the three options. (Below, I'll dig into the details.)

The big decision point will be this Thursday, May 12, as one of the three options will be introduced as the formal redistricting ordinance. The final vote will be a week later on May 19. (More info here.)

(That's obviously too small and too fast to study in detail. Here's giant versions of the current map, option 1, option 2, and option 3.)

In addition to equalizing populations (to within a narrow range of deviation), one major goal of redistricting is to put together districts that contain communities of interest.

But the challenge arises when these communities of interest overlap and contradict each other. Should redistricting be done along pre-existing political boundaries - cities, counties, and school districts? What about natural boundaries like rivers and mountain ranges? Roads can be the most confusing to think about - are they boundaries between neighborhoods (think Burnside) or are they the central spine of a community (think Hawthorne)? Should boundaries have long, hard edges - or are zig-zagging and ragged boundaries OK? Is it important that district boundaries make intuitive sense to residents - or do they even care?

Back in 2001, I was a co-chair of the citizens' advisory committee on redistricting at Metro. Much of our debate asked this question: Should the six districts be largely defined as two districts for each of the three counties? Or should we work to make each district as representative of the entire region as possible - with a mix of urban, suburban, and rural? (I argued for the latter, and lost.)

We asked those big questions ten years ago in part because we were shifting from seven to six districts (as the president became elected region-wide), and so the map seemed wide open. The three possible districting options being considered now are fairly described as a "tinkering" of the outgoing map.

On the jump, I'll dive in and talk about some of a couple key areas where the three options diverge - and what questions they raise.

Let's start by taking a look at Metro-2 (in blue). In the outgoing map, that's the southern suburban district that includes SW Portland (south of I-5, around Wilson H.S.), Lake Oswego, West Linn, Oregon City, Gladstone, and Milwaukie. Other than some of the areas near Clackamas Town Center, those are the older, less growth-oriented suburbs in the region. 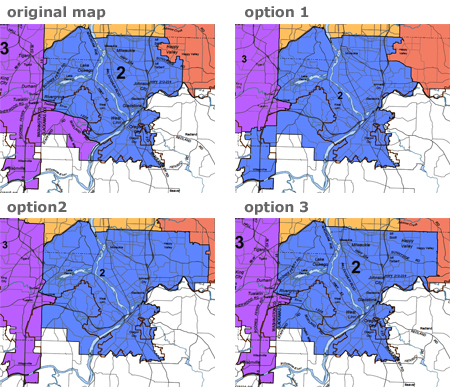 The problem? Being less growth-oriented, Metro-2 is short 18,000 residents - deviating 7% from the goal. So, what to add? Should Metro-2 expand south and west to pick up the Stafford area and Wilsonville as in option 1? Or should it move east to pick up rapidly-growing Happy Valley as in options 2 and 3? Neither area really feels like SW Portland, Lake Oswego, or Oregon City -- but the numbers have to add up. What do you think? Which makes more sense?

Not all the questions are that large-scale. Sometimes it can be just as interesting (and controversial) to talk about smaller communities of interest. Take a look at the variations over on the West side - near the convergence of US-26, Hwy 217, and Beaverton-Hillsdale.

The current map, option 1, and option 3 all use the Multnomah County boundary as a hard dividing line. (That's the north-south line that bounds the west edge of the yellow Metro-6.) But option #2 pushes Metro-6 over the county line all the way to Highway 217. The people in that area - West Slope and Raleigh Hills - arguably have more in common with the folks on the Multnomah County side of the west hills than with folks further west.

By the same token, note that option 3 has Metro-5 (aqua blue) spreading southwest across the (stair-stepping) county line to take in West Haven and Sylvan -- an area that perhaps has more in common with the Skyline area to the north than it does with points further west on the Sunset highway.

So that's another question for you: How important are county lines? Do counties define us? Or should we draw district lines that put neighborhoods together in ways that make cultural sense?

(Incidentally, one way or another the green Metro-4 needs to shrink - as the fastest-growing district, it's 24,000 residents, 9.75%, over the target.)

There's a lot more going on in the Metro redistricting options. Take a look. Tell me what you see. How should the lines be drawn? What does "community of interest" mean to you?