The Four Flaws of a Capital Gains Income Tax Cut

It’s unfortunate that some Oregon lawmakers are pushing to cut the tax rate on income from capital gains. Several legislative proposals exist (and no bill is truly dead until adjournment sine die) to grant preferential treatment to income generated from the sale of assets such as stocks, bonds and real estate. This misguided policy fails on four fundamental levels: it favors some taxpayers over others, it’s ineffective, it’s unnecessary and it’s irresponsible. 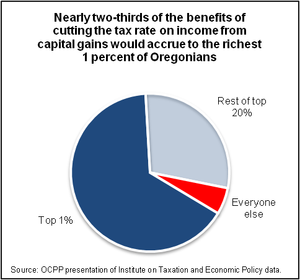 Cutting the income tax on capital gains favors speculators over workers and favors the rich over the rest. It would create a situation where ordinary Oregonians working for paychecks would end up paying a higher tax rate on their income than someone who lives off of investment income. It would also, by and large, constitute a tax cut just for the rich. If Oregon halved the income tax rate on capital gains, the richest 1 percent of Oregonians would get 65 percent of the tax cut. The rest of Oregonians would receive little or nothing.

Cutting the income tax on capital gains is also ineffective as a means to attract investment, contrary to what proponents claim. Demand for products and services, not the amount of after tax income, is what drives investment. Thus, a general tax cut on income from capital gains will have no real impact on investment. Plus, there’s no guarantee that the money would be reinvested in Oregon. And for those who argue for a targeted tax cut for money reinvested in the state, Oregon’s own experience demonstrates the futility of such an effort.