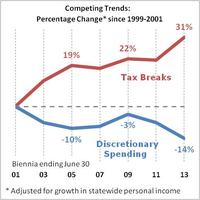 By Steve Robinson of Eugene, Oregon. Steve is a public policy consultant with Decision Metrics in Eugene.

Quick, what do you think is the single factor contributing most strongly to Oregon’s 2011-13 budget crisis?

I analyzed tax and budget data from the Department of Revenue (DOR) and other sources for several biennia, from 1999-2001 through projections for 2011-13. Adjusting all figures for the growth in statewide personal income, I found that discretionary spending through the General Fund (and net Lottery Fund proceeds) has declined 14 percent over the past 12 years – about $2.4 billion. During that same period of time, income tax breaks have actually grown by an even larger amount: 31 percent or $2.9 billion.

In other words, the growth in tax breaks accounts for even more than the current deficit in discretionary spending. Every biennium, these tax breaks take another $500 million more away from education, health care, human services and public safety, with no end to the growth in sight. Without this growth and the attendant loss of federal matching funds, Oregon would have had an extra $4 billion to spend next biennium, and we would almost certainly have avoided the divisive campaign over Measures 66 and 67 last year.

While the Oregon Legislature has made some good progress in recent sessions in controlling tax breaks in the state code, the data clearly show that the main culprit is federal law. Federal “subtractions and exclusions” create tax breaks that primarily benefit the very highest-income taxpayers. The DOR’s biennial “Tax Expenditure Report” contains distribution tables by five taxpayer income tiers. The top tier – taxpayers averaging $143,000 of adjusted gross income in 2009 – received 59 percent of the federal tax breaks. Over the past 12 years, they have received over $6 billion in benefits, compared to about $100 million for the lowest income tier.

After the jump, I explain why I think this problem is bad and getting worse, and what we should be doing about it. Meanwhile, for more information you can visit my website, look up my commentary in the June 12 Register-Guard, read the June 2 Statesman-Journal editorial, and see a PDF of my slide show, catchily titled “Income Tax Expenditures and the Great State Budget Crunch.” Suggested breakpoint

Many factors contribute to this problem, foremost among them being the federal tax code’s favorable treatment of higher income earners. The Bush tax cuts greatly expanded the tax-saving tools available to these folks. The legislature’s tradition of connecting to the federal tax code is a huge issue, making it nearly impossible to enact selective corrections. Such actions would be considered “tax increases” subject to a three-fifths majority rule. Good luck with that.

Another factor is elected leaders’ desire to look as if they’re doing something about job creation. The research in this area indicates strongly that tax breaks are a lousy tool for creating jobs, because such benefits are so often simply windfalls for taxpayers who would have hired more workers anyway, just as soon as business conditions indicated a need for them.

I analyzed an ECONorthwest report from 2008 that found a strong relationship between job retention and DHS spending on human service programs subject to federal matching funds. In-home and long-term care services, for example, would preserve 35 jobs (80 percent in the private sector) for every $1 million spent on the program. An average federal match of 1.66-to-one leverages this to over 90 jobs per million. Tax cuts, on the other hand, create about 7 jobs per $1 million, according to the President’s Council of Economic Advisers. Bottom line: out of all the job-retention tools available to the state, the most effective by far is to reduce the cuts that would otherwise be made in the General Fund.

What should we do to fix this problem? The most important step the legislature could take would be disconnecting from the federal tax code, at least for those provisions not baked into the constitutions. Then we could talk about possibilities like capping or means-testing some of the most expensive federal provisions, including itemized deductions and certain benefits used almost entirely by the wealthiest among us, without needing to surmount the three-fifths majority bar. It will also be important to sunset all of the tax breaks in the Oregon code and require greater analysis and transparency regarding their costs and benefits than is currently available.

I would like to see the governor appoint a work group to meet in the interim to come up with proposals to stop the bleeding – i.e. keep tax breaks from growing any more – and to actually cut them back to a smaller bite out of potential revenues.

If we don’t act, income tax breaks will continue taking another half billion dollars out of General Fund resources one biennium after the other, with even more devastating consequences for our public infrastructure, safety net and educational system.