Oregon’s millionaires are expected to mushroom this decade, which makes one wonder why some lawmakers feel compelled to shower them with tax subsidies in the form of lower tax rates on their investment income.

Millionaire households in Oregon will almost triple in number by 2020, according to a new study by Deloitte LLP’s global financial consulting group, the Center for Financial Services. Deloitte projects that Oregon will have the third highest growth in millionaire households from 2010 through 2020 among all the states. Deloitte published its study (PDF) to help “wealth managers” plan their marketing to the rich.

Among all the states and the District of Columbia, Oregon will rank 24th in the number of millionaire households in 2020, up from 25th in 2010. 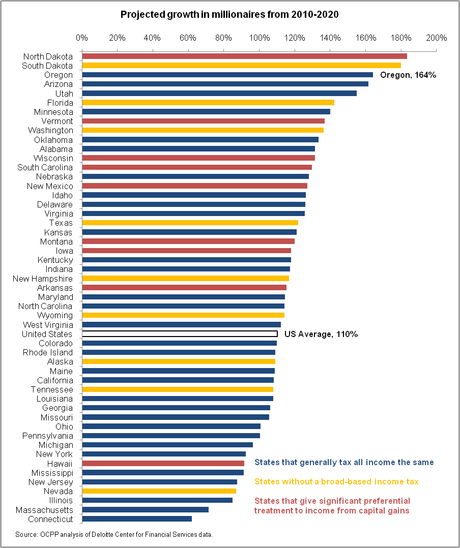 In short, the study projects that Oregon’s well-to-do households will continue to do well, thank you very much, under our current tax system.

For Oregon lawmakers, the report’s lesson is different than that for the “wealth managers” who are Deloitte’s primary audience. Oregon lawmakers are supposed to be the people’s representatives, who look to further the common good. They are the managers of the public structures — education, health care and public safety — that nurture the middle class and protect the vulnerable.

Yet right now, a number of lawmakers — Republicans and Democrats — and the Governor propose cutting the income tax on capital gains. That would hand a huge tax subsidy to millionaire households.

Like I said, with millionaire households mushrooming in Oregon, it makes one wonder why . . .