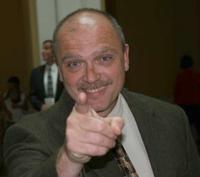 After ten years as a Portland City Commissioner and nine years in the Legislature, Randy Leonard has decided to retire from elective office. You can read his full statement here.

Along the way, Randy also became the first elected official in Oregon to regularly blog - first at BlueOregon and then at his official city blog.

Noting that "Leonard's seat is sure to attract a deeper field of candidates" for the City Council, the O's Beth Slovic names names:

Speculation about who will replace Leonard, the only elected official in city government who lives east of 82nd Avenue, begins today. Names that have been raised for a seat on the council include former U.S. Senate candidate Steve Novick, though he declined Monday to say whether he plans to run; Oregon Rep. Mary Nolan; and Shelli Romero, a public policy coordinator for the Oregon Department of Transportation.

State Rep. Ben Cannon announced Monday that he won't run for the seat.

Oh, and Randy: Your spot here at BlueO is ready and waiting for you!