Will the Oregon legislature really make lining the pockets of Wall Street and wealthy investors a priority before adjournment sine die?

With SB 817 headed to the floor of both chambers in these final hours, it looks like Wall Street and other wealthy corporate investors may be getting a $78 million parting gift.

The legislature is once again considering establishing a state version of the federal New Markets Tax Credit (NMTC). Under SB 817, the Oregon tax credit could cost taxpayers $78 million over five years.

According to a Bloomberg news story, the NMTC has subsidized “more than 300 upscale projects, including hotels, condominiums, office buildings and a car museum, on streets far from poverty.” Examples of others who benefit from the NMTC are those who invest through Missouri-based Advantage Capital Partners, who have led the charge lobbying the Oregon legislature for the subsidy.

Oregon is no stranger to such shenanigans. In 2008, investors in The Nines, a “luxury collection hotel” in downtown Portland got a luxurious tax credit thanks to the federal NMTC. Prudential Financial Inc. reportedly cashed in a $27.3 million new markets tax credit from its investment in The Nines.

With the Campbell family’s Victory Group directing the lobbying effort, wealthy investors are now lobbying to get Oregon to offer its own NMTC. They propose that Oregon match dollar-for-dollar the federal tax credit. If the legislature passes SB 817, investors would receive a combined federal and state tax credit of 78 cents for every dollar invested.

Those pushing for an Oregon NMTC claim that it would attract investment to the state, but Oregon is already among the highest recipients of NMTC investments.

Even without a state NMTC:

• Oregon received almost 3 percent of all NMTC projects conducted in fiscal years 2003 to 2008, even though Oregon accounts for only about 1 percent of the national economy.

• Oregon took in about 3 percent of all NMTC loans and investments during fiscal years 2003 to 2008, even though Oregon accounts for only about 1 percent of the national economy. 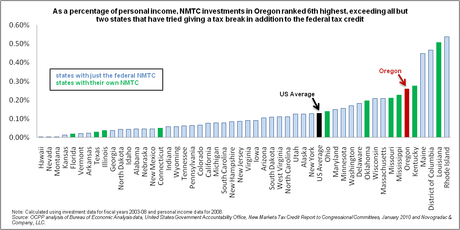 • Oregon ranked 6th highest in the nation among all states and the District of Columbia in terms of the amount of NMTC investments as a percentage of personal income during fiscal years 2003 to 2008. 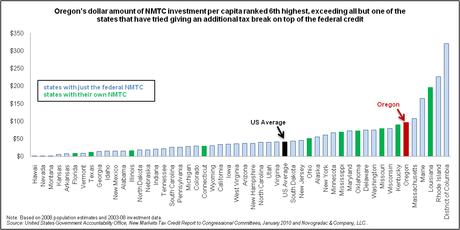 • Oregon ranked 6th highest in the nation among all states and the District of Columbia in terms of the dollar amount of NMTC investment per capita.

There’s no need for Oregon to enact a state NMTC to attract NMTC investments. The money is already coming in.

And as the funding of The Nines shows, some of the state NMTC would fill the pockets of Wall Street with precious state revenue, on top of the federal tax money they are already taking.

Adding insult to injury, despite lots of talk about jobs in Salem, under SB 817 the tax dollars are doled out to Wall Street without any specific requirements that jobs be produced.

SB 817 is about the legislature's priorities and Oregon’s priorities. Is it really a priority to line the pockets of Wall Street and wealthy investors?

If you think SB 817 represents the wrong priority, contact your legislator right now. The votes in the House and Senate are imminent in the rush to adjournment.