Elizabeth Warren's master class in getting what you want 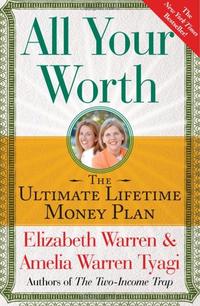 Warren's book on personal finances. you need this book.

About five years ago, I was visiting a friend in the Seattle area, and, perusing her bookshelf as I am wont to do, I came across “All Your Worth: The Ultimate Lifetime Money Plan”. The cover was boring, but I was stuck in Bellevue condo for the morning; I started reading. Turned out to be the best personal finance book ever. Uncomplicated, direct, sensible. No magic formulas, but also no self-deprivation. Pay what has to be paid first, put some in savings, and the rest is for your enjoyment.

Money as it is meant to be used.

I had never heard of the authors. Apparently their previous book was popular with the Clintons, but, for me, that was not a selling point. This book stood on its own two feet. I still use the formulas I learned from the authors (actually, it translates into a single, simple spreadsheet; I’d be glad to share it). I didn’t buy a copy of the book — I’d gotten the good stuff while borrowing it — so I had trouble remembering the authors’ names when I wanted to recommend the book to friends. Or my sons.

The authors are Amelia Warren Tyagi and her mom, Elizabeth Warren. Yes, that Elizabeth Warren. The Harvard professor. Creator of the Consumer Financial Protection Bureau. Public Enemy #1 to the Wall Street banks and their minions in the Congress. The next U.S. Senator from the Commonwealth of Massachusetts. Elizabeth Warren is not only a great scholar and politician; this book proved long ago she knows how to speak to and help “ordinary” Americans.

Something Sen Richard Shelby appears to know nothing about. Shelby is behaving like a petulant 5-year-old, or, more accurately, a Senator bought-and-paid for by the banking industry. He wants to kill the agency. At the very least, he wants to remove its ability to be a watchdog. In this effort to support the banks at the expense of the American people, Shelby demonstrates another way in which the God-bless-our-troops crowd practices a total disregard for the well-being of our troops:

Holly Petraeus is the wife of General David Patreus, former head of our wars in the Mideast and now top spook at the CIA. To her everlasting credit, Ms Petraeus has done what, as far as I know, few top military leaders’ wives have ever done: everything possible to protect the troops and their families stateside. And as Warren explains to Maddow, the General’s wife thinks the CFPB is the way to do this. Sen Shelby doesn’t agree, but we long ago learned that the GOP is happy to send our kids to fight and die but don’t give a damn about their families or well-being.

Kill the CFPB? Sure, says Shelby. Because the banks matter more than the troops, their families and other Americans.

Here is what I find particularly admirable about Elizabeth Warren as she turns the agency over to her assistant, Cordray:

One of the key lessons of “All Your Worth” is that you give up or get rid of those things that undermine your ability to live a long, happy and prosperous life. Gym contracts are bad; pay by the month. Same with cell contracts (but almost impossible with a smart phone). If it keeps you from meeting your required monthly payments (rent, food, etc) and keeps you from putting 20% into savings — it goes. The real goal is to take care of those things and have 40% of your income left for any damn thing you want: household goods, vacations, movies, etc; this is not a barren lifestyle the Warrens promote but the opposite: wealth that you can afford.

So when I heard her speak on Rachel Maddow about the situation with the agency and the need for Richard Cordray to be its director, I saw a woman who was practicing what she preached. Her “ultimate plan” was not be head of an agency; it was to get the agency established and functioning. She has to give up being it’s director? Well, she’s spent years telling people to give up things they want so they can have a better outcome for their life. Give up those shopping trips; give up the second car; give up running the agency that was your idea. You want to get out of debt? Own a home? Start a family?

People screaming about Obama not having Warren’s back or caving on her nomination simply do not know Elizabeth Warren. I don’t know her personally, of course, but the fact that the President didn't nominate her, and that she was more than ok with that (I haven’t seen this kind of enthusiasm from a rejected candidate since Howard Dean, stabbed in the back by the Democrats in 2004, became John Kerry’s most ardent supporter), is exactly what I’d expect from the co-author of “All Your Worth”. I’d be willing to bet that it was she who told the President it was time to nominate Cordray — and I bet he argued with her. And lost. Elizabeth Warren is an amazing person: realistic and idealistic. Visionary and pragmatic. Selfless and self-assured. She’ll be a great Senator.

For now, however, she returns to her roots: teaching. She’s just taught the nation how to get something you really want: You give up the stuff you don’t need so you are able to have what does matter to you.