With Rep. Brad Witt's run for Congress, we now have our second open legislative seat for the 2012 election cycle.

The district includes the entirety of Columbia County, including its Highway 30 population centers Scappoose, St. Helens, Rainier, and Clatskanie - as well as Vernonia. It dips down into some of the rural Washington County turf north of Highway 26 (and outside the UGB.) It picks up a small chunk of Multnomah County that runs along Skyline Boulevard and Highway 30. It includes both the Multnomah and Columbia county portions of Sauvie Island. (Map here.) 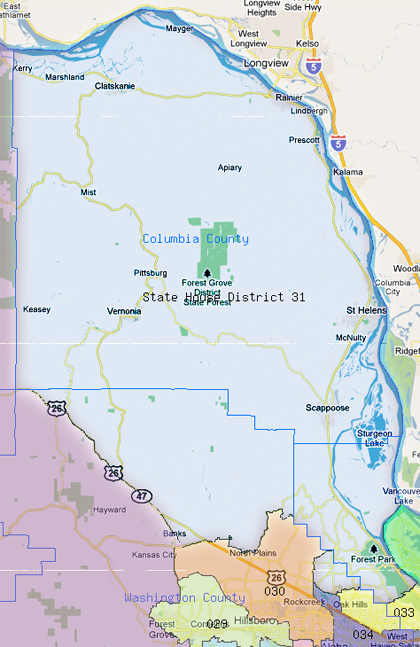 That makes the district somewhat different than the district Brad Witt has served since 2005. Before, the district included most of Columbia County, including all the population centers - but ran all the way out along Highway 30 to take in Astoria. It didn't include any of Washington County or Multnomah County, except the southern portion of Sauvie Island. The entirety of Clatsop County, including Astoria, is now in HD-32 - currently represented by Rep. Debbie Boone (D-Cannon Beach).

Do you live in the district? Whether you do or not, what sort of candidate are you hoping runs?

Update: Willamette Week reports that Paul Evans, the former mayor of Monmouth, is now a Scappoose resident - and considering a run for the seat.

That relocation is related to his work for High Impact Technologies, which is negotiating with the Port of St. Helens to establish a boat-manufacturing facility.

Evans says he spent a lot of time in Witt's district while working for Kulongoski on issues related to the devastating 2007 Vernonia flood. ...

Evans says he's been so busy with work that he has not fully decided to enter the House race but will announce his plans "soon."