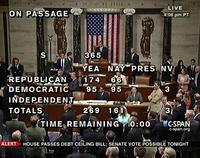 The U.S. House has approved the compromise deal to avert a debt ceiling crisis. 174 Republicans and 95 Democrats voted in favor.

The Oregonian's politics twitter reporter (whoever it is) noted this from Peter DeFazio:

In a surprise, Rep. Gabby Giffords returned to cast a vote in favor of the deal. Here's her tweet:

The #Capitol looks beautiful and I am honored to be at work tonight.

Senator Harry Reid has announced that the Senate vote will happen at 9 a.m. PST on Tuesday.

No word yet on when Rep. David Wu will make his resignation official.