Read About and Speak Out for the Middle Class 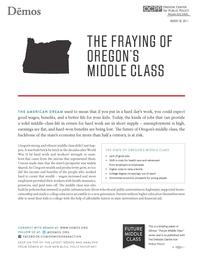 Oregon’s middle class is fraying, with well-paying jobs in short supply and the cost of raising a family dramatically increasing.

As Bob Herbert, former New York Times columnist and now a distinguished senior fellow at Demos, notes “The American Dream is vanishing before our eyes. Sadly, Oregonians who work hard and play by the rules can no longer expect to provide a decent life for their families.”

The recession upped the pressure on Oregon’s middle class, but the stress had been building over several decades The problem is set out in The Fraying of Oregon’s Middle Class (PDF), a new report released today by the Oregon Center for Public Policy (OCPP) and Demos.

The report examines three developments that have seriously strained Oregon’s middle class: the scarcity of well-paying jobs, the rising costs of raising a family and the economic hardships faced by young workers, such as student debt levels and stagnant or declining wages.

This report should be a wake-up call for Oregon lawmakers and our congressional delegation to rebuild the middle class, the backbone of the state’s economy.

That’s why we released it on the eve of “jobs not cuts” rallies throughout Oregon this week heading into Labor Day.

Here’s the schedule for the rallies. Read The Fraying of Oregon’s Middle Class (PDF) and make your voice heard at a rally.

Help stop the fraying of the middle class.