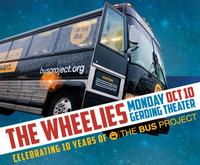 In a few weeks the Bus Project will tip back a glass of Oregon pinot for our 10th birthday. And we’ll raise a few more at The Wheelies for the remarkable activists, campaigns, bi-partisan and innovative policy initiatives, and public-spirited businesses that have made Oregon marvelous in the last couple years.*

This year, the Oregon Legend Award goes to a handful of citizens who have pioneered a role for our state as a national leader in democracy. Secretary of State Kate Brown will join the Bus in recognizing Oregon’s four living Secretaries of State for their groundbreaking work to make Oregon one of the most engaged, open, and innovative democracies in the nation.

“It is my honor to present this year’s Legend award,” says Brown. “It is my mission as Secretary of State to engage all Oregonians in the political process. The Bus Project has been a great ally in this work especially in reaching young Oregonians whom I hope will become life-long voters.”

The United States has struggled to bring full democracy to all citizens. The impulse to decide who gets to vote is as old as the revolutionary idea that everyone ought to have a voice. Historically, and in America today, calculated and committed efforts to keep poor people, people of color, women, and young people from voting have taken many forms. A strong anti-voting movement is underway now.

In Oregon, the tide has often gone the other way. And we owe thanks to Norma Paulus, Barbara Roberts, Phil Kiesling, and Bill Bradbury for their monumental work.

Oregon is an incredibly special place because of these leaders, and their contributions to what I think of as Oregon-style democracy.

Oregon-style democracy is about unflinching transparency, a steadfast commitment to citizen involvement, an appetite to make our elections work for everyone – and to make them work better each year. That’s what Paulus, Roberts, Kiesling, and Bradbury fought to give us, and what Secretary Brown moves forward still today.

I hope all of us can take a minute to cheer the contributions of these leaders, and how lucky we are to live in a state that fights for these kinds of values. It will be a huge honor to have them all at The Wheelies (And I really hope to see you all there on October 10th!)