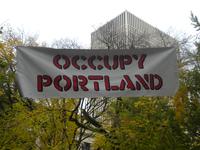 If Chief Mike Reese wanted to position himself as a capable and competent leader for a potential mayoral candidacy, he couldn't have picked a better opportunity to do so than his brilliant management of the Portland Police during last night's tense-yet-peaceful confrontation regarding the eviction of the former Occupy Portland camps-turned-druggie-dens at Chapman and Lownsdale Parks. This police action was watched carefully by the thousands of spectators that filled the streets, thousands more who watched it streaming online (and on local news), and even garnered national media attention. Could you imagine what the results would be if Mark Kroeker was still chief of Portland police? The situation would definitely have been FUBAR'd- and quickly.

Kudos to both Chief Reese- and Mayor Sam Adams- for a successfully non-violent conclusion to the camps that had become a threat to public safety. Now perhaps the Occupy Portland could re-energize their efforts to the original purpose of the Occupy Movement, such as flash occupations of the World Trade Center or local branches of "too big to fail" banks throughout downtown Portland?