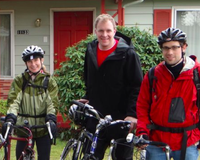 Today Bike Walk Vote, the political arm of the biking, walking, and transit community, announced its endorsement of Jefferson Smith for Mayor.

From the press release:

“Jefferson Smith has demonstrated a strong commitment to creating safe and convenient options for walking, biking, and taking transit for all Portlanders. His focus on transportation funding equity for historically underserved neighborhoods reflects a vision of Portland that we all share,” said Heidi Guenin, Policy Co-Chair of Bike Walk Vote.

"Bike Walk Vote co-chair Evan Manvel said today in a phone interview that Smith's "Commitment, record, and leadership on equity as well as his focus on not spending all of our money on new infrastructure and highways," are key things that stood out for them. Manvel also cited Smith's work to "engage the whole city and work with non-traditional power brokers" as traits that were important to their choice."

The endorsement was based on comparing the candidates’ questionnaire responses, in-person interviews, and performance in the February 6th transportation debate at Portland State University, as well as rolling interviews, where Bike Walk Vote members rode along with each candidate on a commute from their home to their campaign office, reflecting on how we can all best share the roads.

Disclaimer: I serve as the co-chair of Bike Walk Vote.