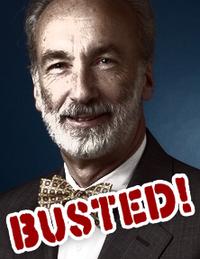 It was one of the strange little mysteries of the 2010 election cycle. Jim Huffman, the law professor and GOP opponent of Senator Ron Wyden, disclosed in his quarterly reports that he'd loaned a total of $1.35 million to his campaign.

The only problem? Previous disclosures had listed his total non-home assets as between $500k and $1m, and he didn't disclose a loan against his house. So, where did the money come from?

Now, we know. As we all suspected, it was from his wife, Leslie Spencer. And because their assets were not jointly held, a contribution or a loan from her in excess of $2400 is illegal. So, the DPO filed a complaint.

At the time, Huffman told the O's Jeff Mapes that the loans were "strictly legal". According to the FEC summary of facts, Huffman and Spencer "operated under a good faith belief that .. the personal loans were permissible regardless of the specific origin of the funds."

Which is kinda funny, because Huffman worked kinda hard to cover up where the money was coming from. Again, the FEC summary of facts (to which Huffman has agreed):

It'd be hilarious if it wasn't so sad.

I guess we know why Huffman ain't running for Attorney General now - or anything else.