GOP legislators: Partying at the beach instead of getting their work done 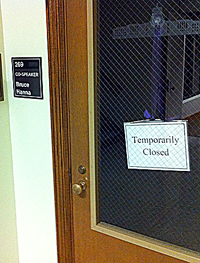 After a long weekend of committee hearings and floor legislating, the Oregon Legislature has completed its work and is ready to...

Oh wait, that's not what happened at all.

That's what Democrats wanted to do - but the Republicans decided to leave town for a party at the beach.

Now, I've always believed in the adage, "Work hard, play hard" - but the idea is that the work part comes first. Just this morning, I was explaining to my four-year-old that he's gotta pick up his room before he gets to watch his favorite cartoon.

Apparently that's a lesson lost on Oregon Republicans. So much for the self-appointed "party of personal responsibility".

And worst of all? Legislators will continue to collect their $123/day per-diem for legislative work - even though the Republicans skipped town to attend a partisan political conference and a night of dancing and boozy carousing.

It's not as if Democrats didn't have their own personal plans and places to go. As Rep. Dave Hunt noted on Facebook, Speaker Roblan canceled his trip to New York to watch the opening night of a Broadway play written and produced by his daughter.

Now Republicans will claim that the legislature was supposed to adjourn last week, before the conference. But that excuse is bogus. The Oregon Constitution calls for a session that lasts 35 days - and by law, the session started at the beginning of February, so going into the first week of March isn't unexpected.

Not only that, but it's the Republicans who've been delaying legislative work on critical bills.

Unbelievable. Here's hoping that voters are paying attention to which party is trying to do the people's work, and which one is prioritizing play over work.