HD-37: It's time to get behind Carl Hosticka 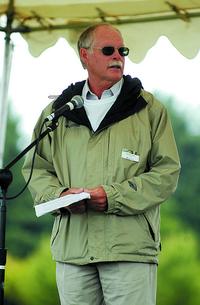 By Tim Young of Portland, Oregon. Tim is a former student body president at Portland State and a former member of the Oregon State Board of Higher Education. Previously, Tim contributed "After Lariviere, a new chance for the University of Oregon".

He is an educator, a dedicated public servant, a father, a grandfather, a husband, an Oregonian and he’s running for House District 37 representing Tualatin, West Linn, parts of Lake Oswego and King City. He deserves your support. Take my word for it. I grew up in the area, know Carl and with conviction can say that Mr. Hosticka is the perfect fit to stick up for the great people of HD 37.

Here’s a few reasons why.

Lastly I’d like to turn to a subject that is close to my heart: public post-secondary education in Oregon. Education can transform a whole society and economy in the long term and Carl knows this. Carl wants to stop the train wreck that started before some of us were even born. For decades, this state has been taking money out of post-secondary education and putting it into prisons. The result? A disinvestment in education and skyrocketing tuition. Tuition alone was up 841% between 1979 and 2009 at the University of Oregon adjusted for inflation. Today in 2012, it is worse. Carl wants to help stop this disturbing trend, for the benefit of all of us. Carl also wants to give institutions the freedom to pursue their respective areas of excellence, and the support they need to be able to hire the best faculty in the world to teach the next generations of Oregonians to lead and prosper.

Republicans want to work with him, Democrats trust him and Independents just need to get to know the guy because this person is an accomplished and gifted public servant who is willing to step back into the arena for the good of his community. King City, West Linn, Lake Oswego and Tualatin would do well to elect him as their state representative, and they should have him as their state representative. He’s the best. It’s a perfect fit.

In short, Carl Hosticka is a very smart person, wise, experienced and will masterfully get things done in the legislature for his district if elected. I urge you to support his candidacy in any way you can. He’s worth it and could help us regain control of the House and create evidence-based, positive change for the community he represents and the state.