Oregon is in shameful company this Tax Day 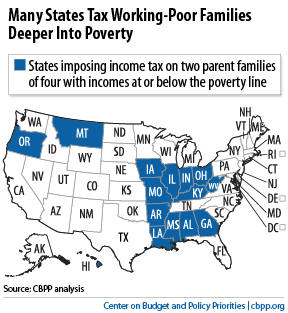 When you look at all of the tables in this recent report from the Center on Budget and Policy Priorities (CBPP) you learn that Oregon, unlike most states, starts levying an income tax at income levels below the poverty line.

Adding insult to injury, when you calculate the level of income tax paid by a family at the poverty line or a little above, you learn that Oregon's income tax is one of the highest in the nation.

It's true that Oregon does not — unlike most states — levy a general sales tax, which typically consumes a higher proportion of the income of poor families than that of wealthier households. Yet it's also true that Oregonians pay property and excise taxes (such as gasoline, utility and tobacco taxes) that fall disproportionately on the poor. This makes Oregon's combined state and local tax system regressive, with lower-income households paying a greater share of their income toward state and local taxes than the wealthiest households pay (PDF).