I'm guessing that Clackamas County Chair candidate John Ludlow won't be playing Sam The Sham & The Pharaohs at his next campaign event, but the way this "John Ludlow is a bully" thing has taken hold, perhaps he should.

Hint: Having an op-ed published in The Oregonian telling people you're not a bully is probably not doing much except perpetuating the story that you're a bully. Especially when you spend the first half of it whining about your opponent.

But then sending out the minions to try and bully people--not so helpful either:

"I agree with my critics who say I am hard hitting on issues, but that hardly makes me a bully," One of Ludlow's supporters, Wilsonville resident Doris Wehler, also filed an Oct. 18 elections complaint with the Oregon Secretary of State's Office accusing Dave Adams, the Stafford resident behind the signs, of failing to register a political action committee.

The complaint was dismissed Oct. 23. Jennifer Hertel, a compliance specialist with the Secretary of State's Office, noted that Adams had registered the "Dave Adams I Love Clackamas County" political action committee Oct. 19. The group also filed paperwork indicating it does not expect to receive or spend more than $3,000 in a calendar year, Hertel wrote. The committee has yet to report any donations or expenditures.

Yeah, move along. No bullying to see here.

To help continue to convince you that John Ludlow is a warm, fuzzy guy, the campaign has taken out this lovely non-threatening pink ad: 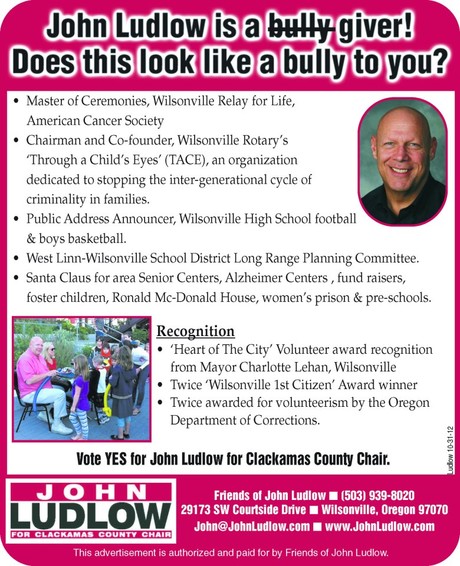