When he was tested by difficult events, every decision he made was exactly the wrong decision. 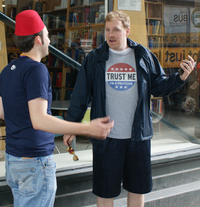 Sometimes, an apology is all it takes: forgetting a birthday, saying something stupid, not keeping a promise. Acknowledging your mistake, showing regret and then attempting to make up for having hurt or disappointed another person is sufficient to maintain a friendship and keep a relationship of trust going.

There are times, of course, when apologies are meaningless. “I’m sorry I cheated on you.” “I’m sorry I stole from the company.” “I’m sorry I wasn’t paying attention and hit you with my car.” Under these circumstances, apologies mean little. They may indicate the person is aware of his or her action’s negative impacts, but the person being apologized to probably has little regard for the words which will sound and feel hollow.

The difference between an apology that is meaningful and one that is pointless isn’t sincerity, regret or humility. Apologies for minor issues are easy to accept; but when it occurs over something significant, an apology is just words. Those words might show that the person apologizing is aware of his or her mistake and is not just “sorry” but humbled, changed and capable, or at least desirous, of doing better. But if that’s your cheating spouse, will you care? If it’s someone who put you in the hospital because they didn’t look before making a right turn, will their words of regret make you any less angry, undo your injuries in the least?

All of which is to say: Jefferson Smith’s apology, while sincere and, I think, reflecting true remorse, is meaningless in the context of his campaign for mayor. No doubt he’s learned a lot of lessons, but the fact that he came to this place where he had to make this apology tells Portland voters he cannot be depended on when sound judgment and cool action are required.

It’s a hollow apology that does nothing to undo the harm he’s done.

Wrong at every turn

Things started getting ugly for Smith earlier this year with the release of more details about his driving record. As events unfolded, he had two options: reveal everything or hope nothing else would get out. The fact that more information was coming out meant it was inevitable that, in time, his entire record would be made public. The smart, practical and mature choice would have been to do a full and immediate data dump. Volunteer the sordid details early on, answer every question honestly, let the unpleasantness hit the fan and then deal with the repercussions. Voters weren’t engaged at that point anyway, so not only would it have set the matter to rest, it would have done so when the political damage would be minimized.

Smith made the wrong choice. His judgment was tested, and he failed the test. Repeatedly. Despite so many examples of political and public figures vainly hoping the media wouldn’t dig out all the nasty little facts, that’s still the strategy Smith chose: hope he’d get away with only some of his awful driving record exposed.

Not very smart for a Harvard lawyer.

Then came the party story. Smith acknowledged to Willamette Week, which broke the story after being contacted by the woman Smith hit 19 years ago, that he hadn’t even told his campaign staff about the incident. He cited fear; he claimed he was concerned about the other people who were involved. As he should have known, however, whatever he feared or thought was irrelevant. He had to know that one day the story would get out. These stories always get out, especially when they involve a high profile, ambitious and ego-driven politician.

How can anyone have confidence in him after that?

And it’s exactly why Sam Adams had no choice but to forego even the possibility of a second term: making all the wrong choices when he needed to make the right ones.

No one expects or desires perfection from politicians. Charlie Hales has difficulty with both the truth and his need to be loved by the voters. He lied repeatedly about his work on a school bond issue that occurred after he left the City Council — lied with my video camera staring him in the face at forum after forum. But Charlie Hales will be Portland’s next mayor, despite his failings as a person and a politician. He’s screwed up, but he’s not screwed up big, and he hasn’t done anything to make enough voters pull back in shock and disappointment.

When Smith posted his apology last week, his supporters tried to rally around it as proof that he had learned his lesson and could move forward to serve the city as mayor. Like Smith, they seem incapable of understanding the core issue: When he was tested by difficult events, every decision he made was exactly the wrong decision. When he had a chance to prove his mettle, he failed — time after time after time.

Here’s what he said to the Willamette Week:

“I am happy to apologize for the worst version of events that anybody offers.”

That’s not an apology; that’s groveling.

I still love Jefferson Smith as a person. I believe he learned the right lessons about violence 19 years ago (although he failed to apply those lessons to competitive sports). I do believe his ADD is responsible for a lot of the behavior he’s been criticized for, and I’m glad he’s being treated for that. His ideas about democracy and participation are brilliant, and he’s one of the most inspiring people I’ve ever met. I would love to see him emulate Van Jones: write a book about his ideas and return to the work at which he excels: exciting and engaging young people to become involved in politics and change the world.

But I will never vote for Jefferson Smith. He has had the entire year to prove he is a capable political leader, and he has failed to do so. He accused his friend Eileen Brady of selling her candidacy for campaign contributions; he stood by silently while she was repeatedly attacked by the local media with what he knew were sexist lies. He let his driving record dribble out in the most embarrassing manner possible. And then he went to confront a woman he had harmed nearly twenty years ago in the hopes he could do political damage control.

In none of these failures will an apology suffice. Portland is the nation’s 24th largest city, and we face huge problems that require capable, dependable leadership. Primary voters didn’t think Brady, a novice politician, was up to the task; that’s a risk for first-time candidates. Why should they vote for a person who has behaved as recklessly, selfishly and foolishly as Smith has? Because he wrote a sincere apology?

I hope he has learned from these mistakes. I accept his apology. But this isn’t about what he’s learned or what he feels. This is about the leadership of Portland, and in that regard, Jefferson Smith’s apology is irrelevant.