OR Legislature: All your jam packed goodness in one juicy post.

Grab your popcorn and strap in, Blue Oregonians. With a mere 11 days left until Election Day, legislative races are now in full tilt crazy mode.

Speaking of crazy, the Oregon Right To Life PAC have been busy little beavers, sending out fetus mailers in targeted districts, letting voters know about the anti-choice candidate who aspires to legislate half the population's wombs. 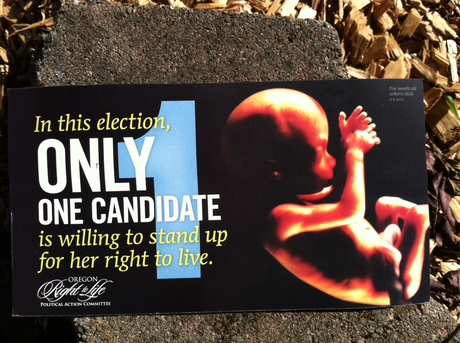 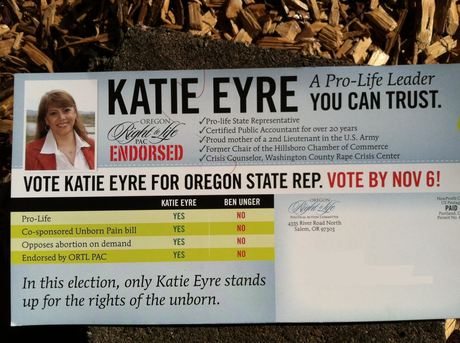 Not to be left out, The Oregon Family Council wants to be sure that you know that Shawn Lindsay (R-Hillsboro) will happily work himself to the bone to ensure that marriage equality never exists in Oregon: 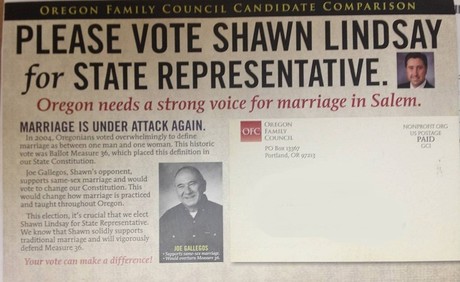 Because of course, nothing says "I'll fight for Oregonians" more than denying a bunch of Oregonians the right to be married.

The obviously better choice in this race is Joe Gallegos, a native Oregonian who has extremely strong ties to the community. Weirdly, Lindsay released a new Spanish language ad yesterday, trying to out-Spanish Gallegos. It's called "Oigos Sus Voces", which I think means "I hear their voices" (Spanish speakers, feel free to correct me-I'm recalling from college Spanish which was--gulp--decades ago). I have every confidence that Lindsay does indeed hear voices. Just not the good kind.

Finally, there's Gary Coe. Click through to that link to learn more about Coe--who owns a predatory towing company that essentially robs people of their legally parked vehicle and then holds it ransom. A real charmer, that one. He's running for state senate against Mark Hass. A metric crap ton of cash is being dumped in the race for Coe.

Although Hass's district has a 14-percentage-point Democratic registration edge and he has seemed well-entrenched, Republican challenger Gary Coe has now topped the $300,000 mark in fundraising -- compared to $137,000 for Hass (these numbers may not reflect current reality, since campaigns have seven days to report their receipts and expenditures).

What Mapes leaves out (and I can't understand why), is that Coe is being funded heavily by ultra-conservative PACs, the Leadership Fund and himself. There's no real grassroots support for this guy. Imagine that: nobody but rightwing PACs seeking power in the legislature want this guy who owns a sleazy business in the legislature.

Got more news on legislative races in Oregon? Please talk that up in comments. The more the merrier.