Slings and Arrows in the HD 52 Race 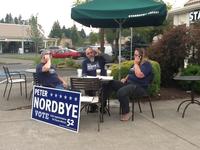 When the going gets weird, the weird turn pro

Over a year ago I threw one up here on The Blue addressing the whole money in politics thing. Sal Peralta pointed out that it sounded pretty similar to an earlier effort that he'd made and John Calhoun allowed as how I'd pretty much nailed it with the Quixote reference.

As near as I can tell, nobody else read it.

Undeterred, we went out looking for a candidate with a solid resume and the chops to address the endless complexity and frustration of running an all volunteer effort on a shoestring budget. That turned out to be Welches resident and retired Parkrose High School principal Peter Nordbye. It's been a party ever since. He's got a pretty comprehensive list of positions by the central and most attractive to voters is the principle of taking money only from human beings who live in the district and not more than the annual $50 which is deductible on state tax returns.

In the primaries, our interaction with our natural allies at FuturePac, the enviro groups, the various unions, and rights groups, consisted mostly of them telling Peter that he had to man up and take the money. Peter stood firm on the issue and instead began to staff up and get the machine operational. Here are some of the highlights between May and now, both good and bad:

Job one for Peter was to establish and enforce chain-of-command for a totally volunteer group which could not be managed by threat of firing or reward of money or position. I was satisfied that he had that down by about the third weekly meeting.

Next he had to design and implement a strategy, and appoint "staff" to appropriate positions.

Jan Smith, a Sandy Gurl who is in marketing took on the campaign manager position, and hasn't slept since. An old friend of Peter's agreed to handle the treasurer's duties, and has managed to meet the requirements of both the state and our own $50 local money rules, and we now stand at over 13k based upon the self imposed standard. Uncle Walt and Steve Winkler deal with LTEs and press in general. Steve is way to the left of me, for example, but retains the self discipline to deal with content and providers alike. Dick McQueen, our septuagenarian sign guy needs to be cloned. In over a decade of local effort, none of us have seen his like nor will we ever again.

As things have progressed, we've gotten buy in from the other two of the three counties (roughly five discreet geographical areas) in our HD. They have sorted their own internal hierarchies, chosen local leaders and report directly to the top, which avoids a whole bunch of potential trouble. We've now gotten endorsements, but zero dollars, from most of the like minded interest groups who had previously held us at arm's length. Peter has been everywhere. He's done the requisite endorsement interviews. attended every event, forum, and parade that he could fit in. He and his wife Blythe, who serves as his scheduler, have surpassed our wildest expectations, busting their butts week in and week out. We are currently doing Walkies, Mailers, and some targeted calling. Volunteer interest and participation is at an historic high for us, and Drive Time, or Drive By as we like to call it, is being set up and implemented for the final push. Anecdotally, the voters, conservative, moderate, or liberal, see the money thing as extremely important and many have signed up on the spot. Not surprising given that national polling shows this to be a concern of 80% of the population of the US.

We have had more than a few setbacks, like a few weeks ago when the governor came into our house for the opening of the new Sandy High School and peed on our carpet by giving our opponent a $500 check in the interest of providing the conservative editors of the Sandy Post and the Hood River News and our opponent himself with the cover to label this Koch swilling, NFIB/AOI enabling right winger a paragon of bipartisanship. Now that's a gift that has kept on giving. I get an expensive four color flyer every week now extolling his moderation. Let's just say that whatever our non-existent polling might have shown, the numbers, win or lose are gonna be worse than they would otherwise have been without the Guv's help.

As far as we know, we're still a long shot, but on the ground, we're better than we have ever been out here. Check out Peter's facebook page as linked above or check out his website. Call your friends and enemies in our district and ask them to donate, volunteer and vote for Peter, but if you live outside of the district, don't send money. He won't take it.