Paging PolitiFact: The astonishing falsehood at the center of Bruce Starr's campaign

And claims about the numbers of jobs "created" are just about impossible to fact check. Let's just stipulate that calculating job creation estimates is going to wind up in a fog of economic theory and actuarial nonsense that lead to conflicting claims on all sides.

Which might explain why PolitiFact hasn't bothered to fact check Bruce Starr's claim - in his television advertising, in his direct mail, and on the stump - that he "championed legislation creating over 30,000 family-wage jobs."

Here's a screenshot from Starr's ad. 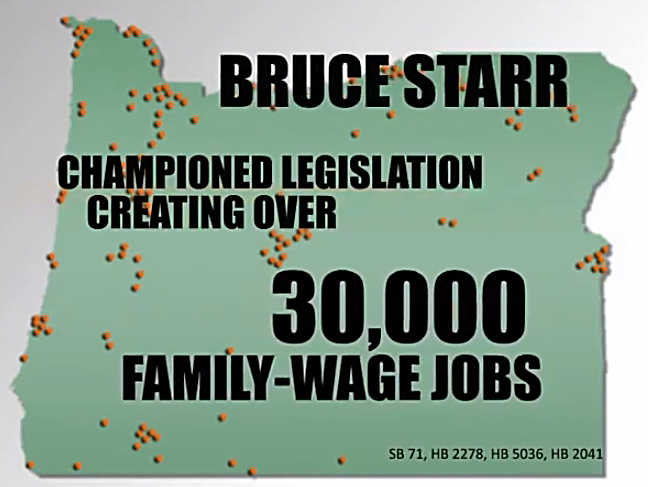 Now, bill numbers get recycled, and Starr didn't cite what years we're talking about, but a little digging makes it almost entirely obvious - since lots of bills aren't about jobs at all.

So, let's sum up: Starr claims to have "championed legislation" to create jobs - but he had nothing to do with any of 'em, except the one that raised taxes for government spending. Which is the exact opposite of what Starr is campaigning on now.

If you want to discuss this one, or any other PolitiFact that you love or hate, the Oregonian's Janie Har and Ryan Kost are doing a live-chat at noon about PolitiFact's process and product.