The bubble is still intact: 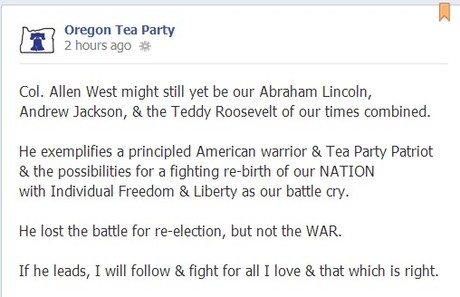 If you're still supporting the guy who acts like a two year old while readily invoking Nazis and is so thin-skinned that he needs liberals to "get the hell out of the United States of America", you're doing it wrong.

West also believes that American women are "neutering" men and is in a red hot hurry for the US to be the "Angel of Death" around the world.

If this is what the Tea Party wants to be the face of their movement, bring it on. Think the GOP lost badly this year? Please, do put your Lincoln-Jackson-Teddy makeover out in front of the cameras on a regular basis. That'll pretty much seal the deal against the GOP for the foreseeable future.