The intransigence of the Republicans in the US House of Representatives has become stuff of legend--especially around anything having to do with taxes, spending and the economy. Even after seeing their party suffer serious losses around the nation in November, the GOP seems hell bent on standing fast against negotiating or compromise.

In the crazy world that is national politics and policy, people throw out ideas in an attempt to do an end-run around such intransigence. With another debt ceiling fight on the horizon, Rep. Jerald Nadler (D-NY) dared to make such a pitch.

"There is specific statutory authority that says that the Federal Reserve can mint any non-gold or -silver coin in any denomination, so all you do is you tell the Federal Reserve to make a platinum coin for one trillion dollars, and then you deposit it in the Treasury account, and you pay your bills," Nadler said in a telephone interview this afternoon.

I asked whether he was serious.

"I'm being absolutely serious," he said. "It sounds silly but it's absolutely legal. And it would normally not be proper to consider such a thing, except when you're faced with blackmail to destroy the country's economy, you have to consider things."

Is it a crazy idea? Oh yeah. Was anyone really taking Nadler's idea seriously? Maybe, but it certainly hadn't gained a lot of attention or traction.

“Some people are in denial about the need to reduce spending and balance the budget. This scheme to mint trillion dollar platinum coins is absurd and dangerous, and would be laughable if the proponents weren’t so serious about it as a solution. I’m introducing a bill to stop it in its tracks,” Rep. Walden said in a news release.

“My wife and I have owned and operated a small business since 1986. When it came time to pay the bills, we couldn’t just mint a coin to create more money out of thin air. We sat down and figured out how to balance the books. That’s what Washington needs to do as well.”

Where was Walden in 2001 when we went marching to war, dumping billions of dollars into Iraq and Afghanistan without raising taxes? If "balancing the books" was such a big deal to Walden, one wonders what's taken him so long to reach this startling realization. And when I noted on Twitter yesterday that Walden seemed to be digging in heels for default, his spokesperson Andrew Malcom replied to me: 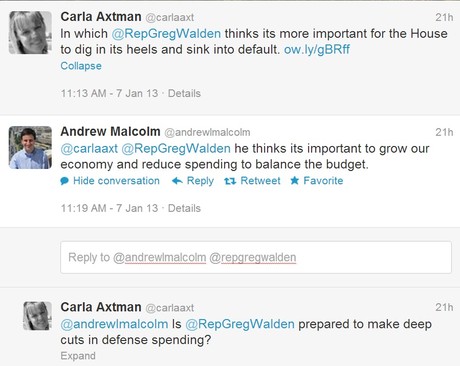 So far, no reply from Malcom on whether or not Walden is prepared to make cuts to the defense budget, which is enormous.

Apparently, Walden is Very Serious about reducing spending, except when he isn't. And even less serious about having a real discussion about how to generate revenue to cover that spending, choosing to focus on creating truly unnecessary legislation to thwart a proposal that has practically zero chance of having traction.

If this is how Walden plans to dig the Republicans out of the hole they're in with the American public, I'm thinking their losses may be even greater in 2014.