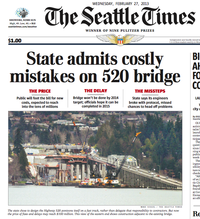 The Seattle Times article; subheads: The Price, The Delays, The Missteps

It’s been an incredibly bad week of press for the CRC. It's as if the public has finally woken up to realize the emperor has no clothes.

Andrea Damewood’s cover story in this week’s Willamette Week details how the Governor’s top adviser on the CRC has been paid over $417,000 by the private contractor designing the mega-highway.

Kitzhaber has made McCaig, 58, his top adviser on the CRC... But she is not a state employee. McCaig’s paycheck is signed by the CRC’s biggest contractor, David Evans and Associates, which profits by the project going forward. To date, McCaig has been paid $417,000.

The story also brings into the light the CRC’s history as a Neil Goldschmidt-the-lobbyist project, that “Elected officials who have spoken to Kitzhaber say that while he publicly endorses the CRC, in private he dislikes it,” and “Patricia McCaig has never done what state law requires of those who get paid to persuade legislators: register as a lobbyist.”

"The long journey of the CRC—and McCaig’s role promoting it—is a telling story of the way in which a huge, deeply flawed project can still move forward via power politics and a whole lot of spin."

Jonathan Maus at BikePortland.org details a huge problem something I’ve complained to reporters about for years: we’ve spent over $168 million but have no good visual portrayals of the CRC. Instead, the media inadvertently shill for the mega-highway by showing a side view of a tiny bridge on a sunny day as an “illustration” summing up the five-mile freeway expansion.

In his impressive piece, Maus writes:

You'd think that with all the support for the Columbia River Crossing down in Salem, lawmakers and their constituents would have a good idea about what their votes — and their tax dollars — will be going toward. But for some reason, CRC and ODOT staff have hidden the project from public view. Despite spending nearly $170 million on consultants and planning thus far, detailed renderings and/or visualizations of key elements of the project are nowhere to be found.

This is not typical of other large infrastructure projects across the country and it begs the question of whether or not CRC and ODOT staff are purposefully pulling the wool over our eyes.

Maus also offers up a visual about the massive impact this project would have. It’s must-see (and read) journalism.

Former Reps. Katie Eyre and Jefferson Smith are teaming up as part of a radio ad campaign, outlining the many reasons people from both sides are upset about the boondoggle and putting the half-billion dollars “on your credit card.” They talk about the job losses from the mega-project, the non-existent plans to pay for the project, and that we can do better.

The mega-project is apparently running into its’ first eight-to-nine-figure cost overrun, even before it has started. That’s right – it’s projected to have to pay upriver firms, whose products can’t fit under the new design, $30 to $116 million in compensation for building what’s effectively a wall between them and their customers. It may not end there – cue the lawsuits. In The Oregonian:

Told of the estimate Tuesday evening, however, company representatives reacted in disbelief, saying the range, and other figures in the application, were too low.

Up north in Seattle, we had a front-page headline that could soon be coming south. Yesterday The Seattle Times reported: “State admits costly mistakes on 520 bridge.”

Transportation Secretary Paula Hammond also said the problems likely will force officials to miss their December 2014 goal for opening the floating section of the new six-lane bridge. “I’m hopeful the project will be done within 2015,” she said.

The new costs, yet to be determined, will reach the tens of millions of dollars, and the bill will go mostly to the public rather than contractors — because the most severe cracking was triggered by what Hammond described as the state’s own design errors.

She doesn’t know if the price of the fixes and delays will reach $100 million...

The final costs aren't clear, and the project is not yet done. But just like the CRC, there’s a huge financing hole in project, of $1.4 billion. Again, cost overruns and construction problems on these mega-projects are completely predictable; 90% of mega-projects go over budget.

As we start another mega-project in Seattle, we’re already running into problems there. From King 5 news: “Rush to start Viaduct work resulted in millions in extra costs.” This is, of course, just the tip of the iceberg.

A KING 5 investigation found that after a year of design work, the Washington State Department of Transportation (WSDOT) made a major, last-minute design change that affected nearly every element of this phase of the job.

The change resulted in an avalanche of change orders for Skanska, resulting in new work and re-dos... Missing details, unfinished designs and changes to accommodate the overpass design added costs. The $114.6 million contract ended up costing the state $122.7 million.

Project that 7% overrun on the CRC, and you’re at $280,000,000. Again, the overall costs aren't complete; but the tunnel hasn't even reached the more technically difficult parts of its construction.

According to Oregon legislative leadership, this mega-highway boondoggle shouldn’t require a stop at the Ways and Means Committee, which normally reviews everything with greater than a $50,000 impact on the Oregon state budget.

Hoping that Oregon pays only half of it, and cost overruns are low, it will only after all, have 40,000 times the impact that normally triggers careful review.

It's time for some real leadership from the Oregon Senate, in slowing this mess down. Here's hoping they can bring some sanity into the discussion.