Once again, the Oregon Legislature will consider a bill to have Oregon join the National Popular Vote compact. In short, SB 624 would be a state law that would change the way that Oregon awards its electoral votes. (You see, the Constitution allows states to determine how they are to be awarded.)

Of course, there are technical hurdles. What do you do if the vote is too-close-to-call? For example, most states require a recount only if their state's vote is super-close. But the total vote can be within 0.1% even if all 50 states have solid majorities. What if there are court challenges? And so on...

On the one hand, the electoral college completely distorts our elections - with some states getting lots of attention (Ohio, Florida, Nevada) and most other states getting completely ignored. It effectively disenfranchises any voter that lives in a state that is a landslide vote for the other side. On the other, I'd really dread a nationwide recount -- especially if elections are run by the states, or worse, by the counties; and according to wide variations in election law.

As for stupid maps..

Meanwhile, there's been WAY TOO MUCH attention paid to a silly map that attempts to redraw state boundaries so that the states are all equal in population. 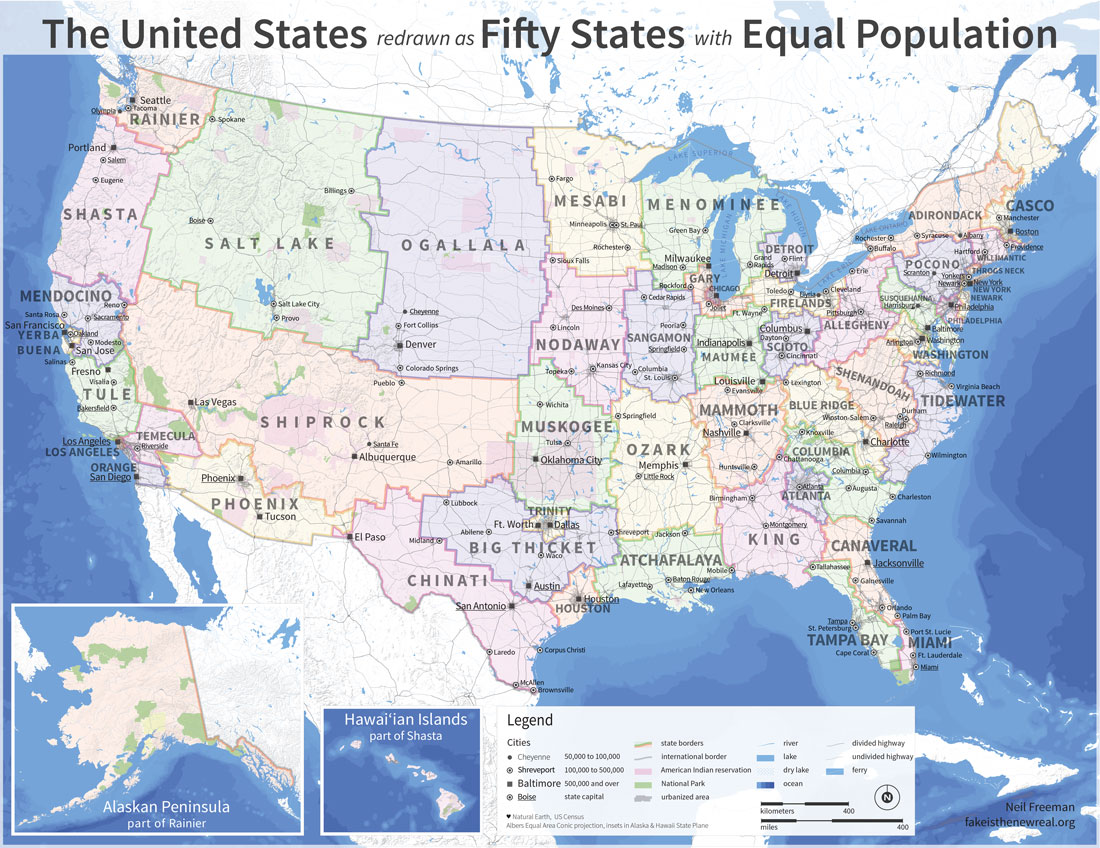 NPR's Robert Krulwich, one of the best science reporters ever, even went so far as to call it "a crazy but rational solution". Nevermind that Mitt Romney would have won under this map (since Democrats tend to be packed into cities).

But there's a relatively simple solution to that problem - at least, a partial solution. And it doesn't require abolishing the electoral college, or moving to a national popular vote, or redrawing state boundaries. It won't require a constitutional amendment either. Just a law, passed by Congress.

The simple solution? Just double -- or triple -- the size of the House of Representatives. There's nothing magical about 435 members of Congress. It's just a number set by statute. In fact, it used to go up every census, until 1911, when Congress decided that 435 was enough. (It briefly popped up to 437 when Hawaii and Alaska came in between censuses.)

If we were to double the size of the House to 870 members, the Electoral College would go to 974 -- and the disproportionate effect of the Senate would be cut in half. Nationwide, each electoral vote would correspond to 318,792 people. Each of Wyoming's four electoral votes would represent 142,075 people - down to just 2.2x their appropriate representation.

If we were to triple the size of the House to 1305 members, the Electoral College would go to 1409 -- and the disproportionate effect of the Senate would be cut even further. Nationwide, each electoral vote would correspond to 220,091 people. Each of Wyoming's four electoral votes (yup, still four) would still represent 142,075 people - now down to just 1.5x their appropriate representation.

And incidentally, if we were to double the House, Oregon would actually jump from 5 members to 11 - and tripling would get us to 16. We're one of the states that has absurdly overstuffed congressional districts (having missed a sixth seat in 2010 by just 45,000 residents.)

Of course, doubling or tripling the size of the House would have all sorts of other unintended consequences. But if we're talking about redrawing state lines after every census, well, mine is the less-crazy idea of the week.