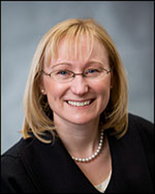 Well, here's a bit of a surprise. Lynn Peterson has been named by Governor Jay Inslee (D-WA) as the new director of the Washington State Department of Transportation (WSDOT).

Most recently, Lynn has been serving as Governor Kitzhaber's chief transportation and sustainability advisor - a post she took after resigning as the elected Chair of Clackamas County.

“We need an innovative approach to fixing a transportation network that is outdated and hampering our economic growth,” said Inslee. “Lynn has the experience, creativity and leadership skills to help Washington build a transportation system for the 21st century. And we’ll do that in a way that more efficiently moves people and goods and reduces carbon emissions.”

“I am honored to have served Governor Kitzhaber and the citizens of Oregon,” said Peterson. “Together, we have made significant progress leveraging more investment for Oregon communities to meet their economic, social and environmental goals with less revenue. These values hold true for all citizens in the Northwest. I am pleased to be joining Governor Inslee’s Cabinet to help meet his desire to efficiently and cost-effectively build safe and healthy communities everywhere in the State of Washington.”

As an elected official and as an activist, Peterson had a track record of supporting sustainability. PubliCola's Erica Barnett called her appointment a big win for bike and transportation advocates. Barnett cited BlueOregon contributor Evan Manvel - another Oregonian who has recently headed north (to serve as a policy advocate for the Cascade Bicycle Club) - who said she has "a long record of thinking about our issues and working to improve transportation. ...While she's a traditional engineer, she has an ability to think beyond the old road-building approach and see how congestion pricing, transit choices, biking, and walking can make the whole system work."

While Peterson's appointment might be a surprise, it's not really a surprise that he'd select a strong environmentalist with a professional background in highway engineering as the leader for WSDOT. After all, Inslee is known as a strong environmentalist, including authoring a book on clean energy -- and campaigned heavily on making Washington the sustainability capital of the country. As a result, the Washington Conservation Voters engaged in their most aggressive, most expensive campaign ever on behalf of Inslee's candidacy.

This would seem to have a big impact on the CRC project as well - since Lynn is a strong supporter of light rail and non-automobile forms of transit.