Oregon May Help Reverse Corporations as People and Money as Speech 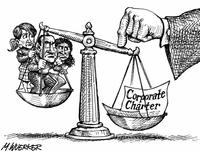 By Rachel Ozretich of Corvallis, Oregon. Rachel is the co-founder of Corvallis Area Move to Amend.

The largest corporations and the wealthy elite have way too much power in our country and the world. Why do so many people believe many of our politicians are corrupt? Why has the U.S. done so little to slow our huge contributions to the climate crisis? Why can't we get a universal health care system like most other developed countries? Why do we have a huge military budget and get into so many wars? Why did we go into massive debt in order to bail out failing mega-corporations? Why did they fail in the first place?

The Oregon State Legislature has begun deliberations on many measures. One of the most important is House Joint Memorial 6 which calls on the U.S. President and Congress to support passage of an amendment to the U.S. Constitution establishing that "statutory entities do not have constitutional rights and that legislatures may regulate money that is raised and spent for political purposes." This was inspired by the national Move to Amend Coalition that advocates for essentially the same two amendment components.

HJM 6 is sponsored by Rep. Brian Clem at the request of a member of Oregonians for Restoring Constitutional Democracy, which is a coalition of Move to Amend (MTA) affiliates in Oregon, (an organization of small business owners), , the Rural Organizing Project, and Oregon PeaceWorks (so far).

Now is a key time! The legislators on the Oregon House and Senate Rules Committees need to hear how constituents feel about HJM 6 as soon as possible. (There are two related measures being considered, HJM 5 and SJM 3, which are weaker and do not encompass the essential two amendment components.) Anyone who wants to help can visit, call, and/or email their own Representatives and Senators, as well as any of the legislators who sit on either of the two Rules Committees.