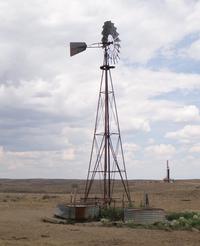 It can happen. Federal regulations can lag behind the best practices of the marketplace.

Take for example the gold rush going on for renewable energy.

Who’s making out a pretty good return on investment from all these wind turbines? Not the federal government. Not the average taxpayer.

Why? Those wind farms you see are on private lands.

And that’s not because no public lands are suitable. Set aside all the Wilderness, National Parks, golden eagle, sage grouse and bat habitat that you could ever dream of. This is not a jobs vs. the environment conundrum. Oregon, for example, is 53% federal lands. There just aren't that many sage grouse to occupy it all...

We’ve got the demand. The market is supporting a huge growth in green power. Ratepayers like you and I willingly paying extra for the kind of power that’s kinder to the planet.

And our current supply is nothing to sneeze at. On some days the northwest is already producing more wind power than hydro power.

So why is it that our public lands produce just a sliver of this supply?

Getting to yes in the permit process is unpredictable, challenging lenders who want to see a return before, well, before the sea levels rise.

Even if an angel-investor-funded wind power project makes its way to fruition, the right-of-way rental fees it could produce won’t be disbursed to local governments to support local essential services, and won’t pay for the permit process itself. These right-of-way fees, modeled on fees charged to utilities for overhead power lines, have not exactly kept up with the new energy economy.

How bad is it? Nationally, only 20% of wind power is produced on federal land.

All together, it’s the perfect storm of bureaucracy.

As they say, there oughtta be a law.

With authorship from House by Paul Gosar (R-AZ) and in the Senate by John Tester (D-MT) and initial co-sponsorship coming key western state Congressional leaders in the House like Representative Earl Blumenauer (D-OR) Representative Peter DeFazio (D-OR) and key co-sponsorship in the Senate from no less than Senate President Harry Reid (D-NV) this bill promises to help shift the nation away from dirty fuels like coal that are disrupting our climate and at the same time will bring new family wage jobs to rural communities, and will return a fair share of the royalties to help fund wildlife conservation where the energy was produced.

A cool planet means cold water and happy fish, so it's no surprise the conservation community supports the bill.

And wind turbines, solar cells, and geothermal wells all mean jobs jobs jobs. The Center for American Progress last year cited a UC Berkeley study that shows that the construction of just one MW of wind creates 2.9 jobs, one MW of solar creates more than 6.6 jobs, while one MW of geothermal creates about 5.7 jobs - all of these figures being direct jobs, not counting the bounce to the service, retail and other job sectors these direct jobs create.

The public benefits from the development of renewable power from public lands?

They’re better than a gold mine.

This investment in renewable energy pays off for generations to come.

Why should we wait any longer to stake our claim?