Blumenauer: "You are here at a critical time." 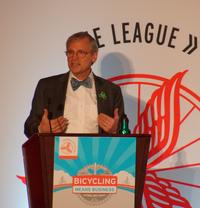 Congressman Earl Blumenauer opened this week’s National Bike Summit with a series of remarks you don’t want to miss.

The co-founder of the Congressional Bike Caucus, Congressman Blumenauer is a recognized national leader in federal transportation policy. And he didn't disappoint the hundreds of delegates who wanted to hear what's working in Portland and across the nation. He sang the praises of the bicycle. And he even kicked in a little reference to some of our neighbors who don't feel the same way.

But what was most fascinating to observe about his talk was not the bike wonk, but the passion that he brought and his sense of what's possible in the current Congress on a number of issues.

Earl Blumenauer wants you to get involved and believes you can make a difference.

He told the story about the fight to win bike lanes on Pennsylvania Avenue. Just four years ago those now famous lanes from the White House to Capitol Hill did not exist. Things do change.

But his speech was not just about bikes.

Congressman Blumenauer's closer was West Wing quality, the kind of thing that doesn't fit in to a sound bite for the news or in a campaign commercial.

Watch and listen to him as he strategizes out loud about what legislation this Congress will pass and why.

He says it: "You're here at a critical time."

For more continuous coverage of the Bike Summit follow Jonathan Maus at BikePortland.org.

Ready to learn more about spending on the jobs that the cycling industry produces? The League of American Bicyclists have state by state detailed economic reports here.

Ready to make your case to your elected officials about the benefit of cycling? The latest local political update from the Bicycle Transportation Alliance's advocacy staff is here.