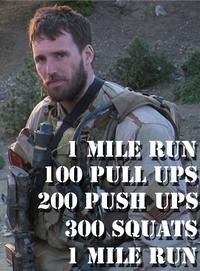 Navy Lt Michael Murphy, who won the Medal of Honor for actions in Afghanistan

I have ambivalent feelings towards Memorial Day. I am humbled that men and women throughout our nation’s history have willingly (and some, not so willingly) put their lives in mortal peril in order to preserve the country and home they loved. But I can never escape the knowledge that few of our wars have been justified or are justifiable. The courage and actions of the dead should be honored, but the causes of those deaths?

We have a near-idolatrous reverence for the military in America today. Simply wearing the uniform automatically makes one a hero despite the fact that only one or two percent of those in service will ever face an enemy. Most of our military are safe and secure in America or on bases on friendly soil (or big-ass naval carriers that have more problems with shipboard discipline than threat of enemy attack). As a vet myself, having served during the post-Vietnam era (1975 –1979), I faced two threats: the Irish Republican Army (I spent 3-1/2 years of my service in England) and Global Nuclear War.

There was not a damn thing heroic about my service. I joined to get my GI Bill (which was a joke in the 80s for people who served when I did). However, by volunteering in peacetime, whatever my reasons, I kept our nation’s defense system functioning — for what that was worth. Unlike Dick Cheney and most of the chickenhawk brigade that got us into the Iraq War, I did serve. I wore the uniform and, despite rarely having thought about it at the time, did place my life on the line. I have no doubt I would have done my duty had the need arisen, even though that duty would have been to make sure World War III went off smoothly.

I’m not proud of that. In retrospect, I should not have joined the Air Force, but at the time, I was just doing things the easy way. (I did that for a long, long time.) But I did serve, as did my father (an Army draftee who stayed stateside during Korea, probably because he was married and had had polio as a teenager), my grandfather (a Marine who occupied Nicaragua), and my two sons (Oregon National Guard, with a tour of Iraq, and the Coast Guard). For those of us who served, we have Veteran’s Day. But that’s not today.

Today, we should not merely venerate those who died in service to the country; we should reflect on how many of those deaths should not have happened. We celebrate the “Greatest Generation” and how they defeated the Nazis and Japan, but how often do we reflect on how WWII might have been avoided by not punishing Germany so brutally after WWI? We learned that lesson, and our enemies from WWII remain our allies to this day. Was the Civil War inevitable? Korea was not; the Spanish-American was not. Iraq was a criminal act, and Afghanistan should have been a quick defeat of the Taliban and Al Qaida and no more. So many we honor today died needlessly.

But not in vain.

As critical as I might be about war and war-mongering, I refuse to connect those feelings to the patriots who served and died (and certainly not to those drafted and sent to war to die, especially those from the Vietnam War, so many poor young men sent to die in war for a country that had little use for them otherwise). Not one American should have died in Iraq, but I am glad to honor their service and sacrifice. Today, with tens of thousands of other Crossfitters, I’ll be joining in the “Memorial Day Murph”, a workout and fundraiser in honor of Navy Lt Michael Murphy who died in Afghanistan in 2005. (This workout is one Murph, a Crossfitter, did frequently, wearing a 20lb weighted vest.) As I said at the beginning, I have ambivalent feelings about this. “American Blood” by Reckless Kelly expresses my feelings about Bush/Cheney’s two wars, and I do wish at some point, Americans would stop volunteering to serve in immoral wars just because it’s their “duty”.

That’s an argument for another day. Today, I’ll do this one small thing with a community of friends in honor of the good part of Memorial Day: the willingness of Americans to defend our country even with their lives. I have no mixed feelings about that; their families and friends deserve to know that their lost loved ones are held in esteem by their fellow Americans regardless of the actions of the Commander-in-Chief. Murph and his comrades fought heroically for a cause they believed in, and they are missed by those they left behind. I have no trouble honoring their memory.

But tomorrow, and in the days and weeks to come, the immoral nature of war needs to be addressed. The military-industrial complex Eisenhower tried to get us to take seriously is bankrupting America and poisoning the world. Citizens United gave the warmongering corporations free rein to try and control even our elections (and we thwarted much of that last year, but the challenge remains). We have to end the mindset, and the corporate greed, that sends young Americans to die in wars that are wrong, wrong, wrong.

That’s for tomorrow, however. Today is Memorial Day, and only a heartless person would disrespect the memories of those who died in uniform. I won’t attend any ceremonies beyond Memorial Day Murph, and I won’t escape my mixed feelings (I never escape those). But you won’t hear me bad-mouth the fallen. I’m not as gleeful in celebrating this day as many seem to be (dear god, the advertising). I think I face this day with the solemnity that is proper. I can’t find it in my heart to celebrate the fallen, but I do know I respect and honor what they did, for reasons they believed in.

To honor those who died, we must do all we can to ensure that those they left behind won’t face the same choice. To honor the fallen, we must work to prevent more names being added to a list that is already far too long.