All Republicans in Multnomah County should be ashamed of their county party today. 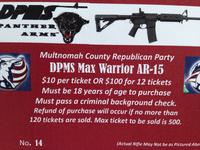 It's hard to express how utterly tasteless, pathetic, and outrageous this is.

On December 11th, a gunman ran into Clackamas Town Center with an AR-15 semiautomatic rifle, killing two people and wounding another before killing himself.

Exactly six months later to the day, on June 11th, the Multnomah County Republican Party announced a fundraising effort that includes a raffle of an AR-15 semiautomatic rifle.

OK, I get it. Assault weapon raffles have become trendy among right-wing fringe organizations. I'm sure there's a certain amount of pride they're taking in tweaking liberals that are concerned about guns. Ha ha, you're so funny. (But really, is it still funny and original when you're the gazillionth group to pull this stunt?)

But this is just offensive. No matter what you think of our gun safety laws. No matter whether you think they're fine as-is, too restrictive, or not restrictive enough. To be raising money by gleefully raffling off an AR-15 on the same exact day that two people were killed by an AR-15, that's just disrespectful to the victims and to all those that knew and loved them.

I won't name the shooter, because it's publicity they crave. These mass shooters deserve to die (or go to prison) in ignominious anonymity.

But I will name the victims. Cindy Ann Yuille, 54, and Steven Forsyth, 45, breathed their last breath inside the mall. Kristina Shevchenko, 15, was seriously injured, but survived. The lives of the victims and their families were forever changed on that day.

And for the Multnomah County GOP to turn this anniversary into some kind of sick joke -- ha ha, we're raising money and poking in the eye of the gungrabbers -- is just wrong. Period.

And they should be ashamed of themselves.