Greg Walden votes for Tea Party insanity. Is it time to give him a strong Democratic challenger? 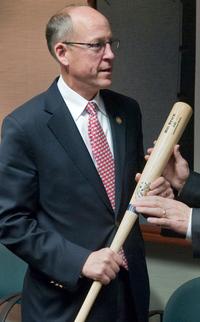 Despite telling the NY Times just yesterday that "We’re trying to find a way through it," Walden tonight voted against ending the Tea Party -led government shutdown.

He's long been a close ally of Speaker Boehner. And yet, today he was just one of two members of the GOP leadership (James Lankford, R-OK, is the other) to split with Boehner and join the Tea Party lunatics.

This temporary plan does nothing to address the epic problem: spending borrowed money we don’t have and cannot sustain. It kicks the can down the road yet again for only three months, and we’ll be right back where we ended up this week. Enough is enough. Every day, families throughout Oregon and the country sit down around their kitchen tables to balance their budgets and discuss crises and practical ways to resolve them. It’s long overdue that Washington, D.C. do the same.

Yeah, Greg. That's the whole point. Every day, families sit down and discuss how to balance their budgets.

Every day, families discuss practical solutions. Instead, the House Republicans took us to the brink, thinking that President Obama and the Democrats would blink - repealing health reform (or something) in exchange for just keeping the government open.

I don't often agree with Rep. Greg Walden. But with few exceptions (here's a big one!) I've always considered him a smart, thoughtful, strategically-minded guy. As it turns out, he's joined the lunatic caucus after all.

Across America, there are congressional districts previously considered solid for the GOP that are now in play. What about OR-2? Can Walden be beat?