Those “Portland is a bicycling utopia” articles we see all the time? Not written by Portland bicyclists. Those of us who ride on a regular basis know how far from utopian our city is. That it’s better than almost anywhere else?

I could detail the many challenges and dangers that confront Portland bicyclists daily, from teeth-jarring streets to distracted drivers (cell phones, drinks, kids, friends, sun glare and more) to angry drivers who think we don’t even belong on the streets. Instead, I’ll focus on one intersection and a situation today that illustrates one of the major problems facing bicyclists: the wide-spread lack of understanding what is involved in making bicycling safe.

The roundabout (aka “traffic circle”) at NE 24th and Tillamook is enough of a danger on a good day. Visibility is awful; for bicyclists, pedestrians and motor vehicles, the danger is always present that we won’t see someone on the other side. Or they won’t see us. (The one at NE Tilliamook and 7th is even worse.) But this morning, a construction crew needed to put up signs to warn of a detour, so they set it on the approach to their work, just south of the roundabout.

Unfortunately, they needed to put it about 3 feet further south. They seemed to have no idea that Tillamook is one of the few east-west bike routes on the eastside that provides safe, low-traffic transit for Portland bicycle commuters. I use it daily to go to my CrossFit gym (on NE 28th, just off Glisan); I pass parents taking kids to schoo, workers, shoppers and others. Tillamook’s been designated a “greenway” and the speed limit is 20mph; most cars use it for local access only, which is what the greenway law intends.

I can only assume that the construction crew didn’t know this and their bosses didn’t know it. Perhaps the city didn’t inform them, or, if they did, the crew either ignored the information or didn’t know how to apply it to their work. I took some pictures to illustrate how they got it dangerously wrong — and how I fixed it with no danger to anyone else. 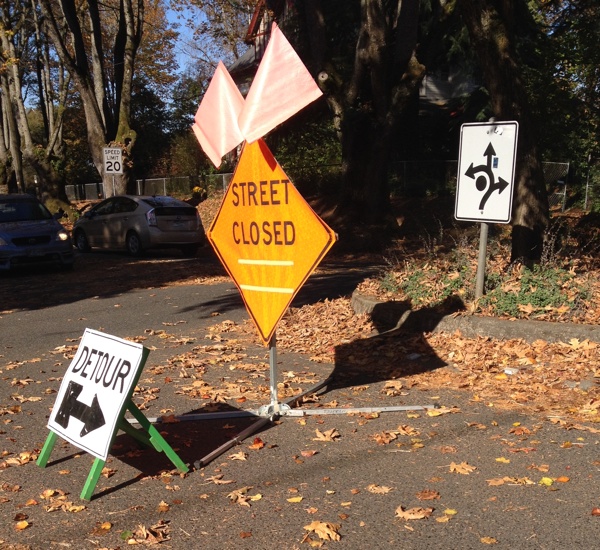 Above is the signage installed on the south side of the roundabout. Looks fine, right? Out of the way of traffic, clearly visible. Sure — out of the way of some traffic. 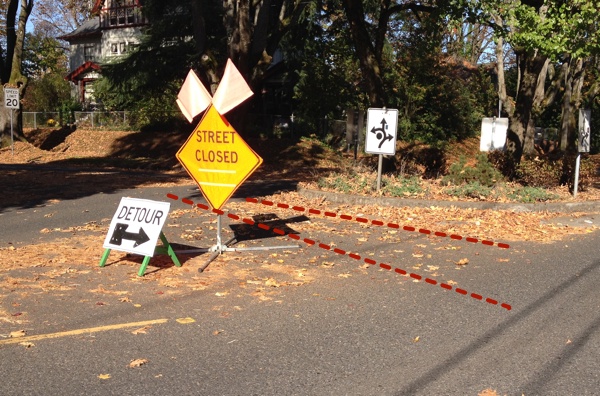 But here’s the resulting path for bicycles heading east. How narrow is that? 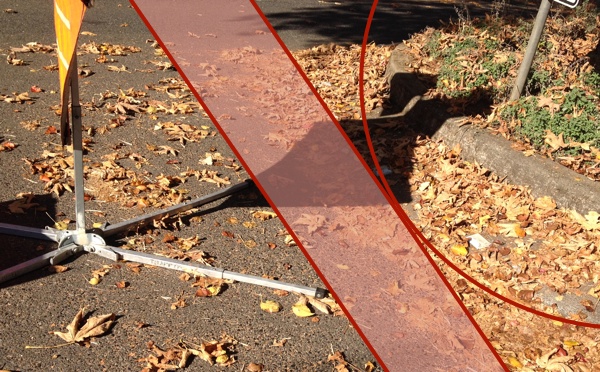 This narrow. That’s about 1 foot. And what is hard to see, and I’ve tried to illustrate with the curved line, is the raised curb of the roundabout — hidden under the fallen leaves. This was hard enough for me in the bright morning sunlight; anyone coming through there at night, in the dark? 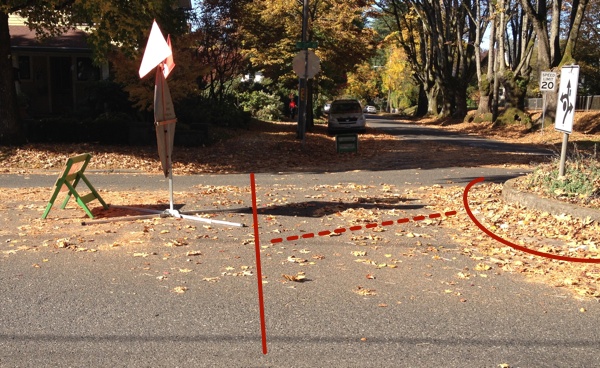 So I moved the sign another 3 feet to the south. That’s all it took. Now the path past the roundabout is pretty much as normal. There’s more than enough room to ride through without coming anywhere near the sign or curb.

But does that put the sign into the way of drivers? 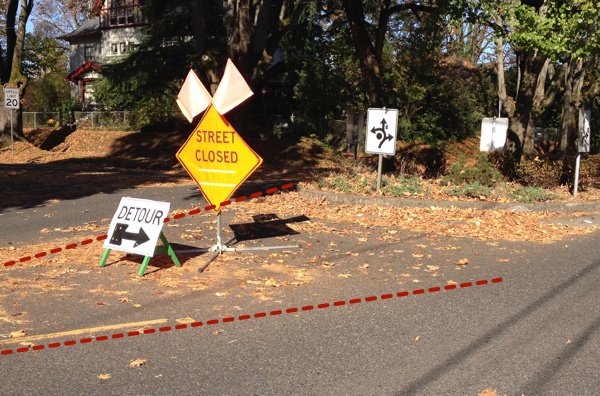 The red lines mark the painted traffic lines that guide vehicles around the traffic circle. The two signs are well within that area. But this placement does cause a problem — for east-bound cars. Unlike bicycles previously, however, their circumlocution around the barrier is not endangered. A bit more difficult, yes, but really: if a person can’t drive around the signs as I placed them, they need to park their car and ride the bus.

Or they need to find a different street in the first place. Let’s remember: NE Tillamook is meant to be a street for bicycles and pedestrians to travel safely and with minimal obstruction from cars and trucks. That was the intent of the 2011 law Ben Cannon (with the invaluable work of Christy Splitt, his great Leg Assistant) sponsored on behalf of the City. There are plenty of streets for cars to use, streets not intended for the safe and peaceful passage of bicycles and pedestrians.

Bicycling in Portland is an on-going challenge to enjoy riding (I love riding) while avoiding getting broken on the ground (a task I’ve failed at three times in less than 5 years). It’s maddening to have the few major transit routes that we depend on made unnecessarily dangerous. The recent destruction to N Williams, the city’s most-used bicycle route, is shameful: no street work should end up with repairs as bad has been done near Russell and Beech. Situations like I and others faced today by this careless, thoughtless, needless placement of a sign is unacceptable. I know PBOT tries to make life better for bicycles and pedestrians, but the sign this morning was not an isolated incident. This is the third time I’ve relocated a sign placed in this kind of dangerous position in the past two months.

That’s not supposed to be the job of citizens. Acting like a vigilante is not good citizenship. This morning, however, it was necessary.

And that needs to end.